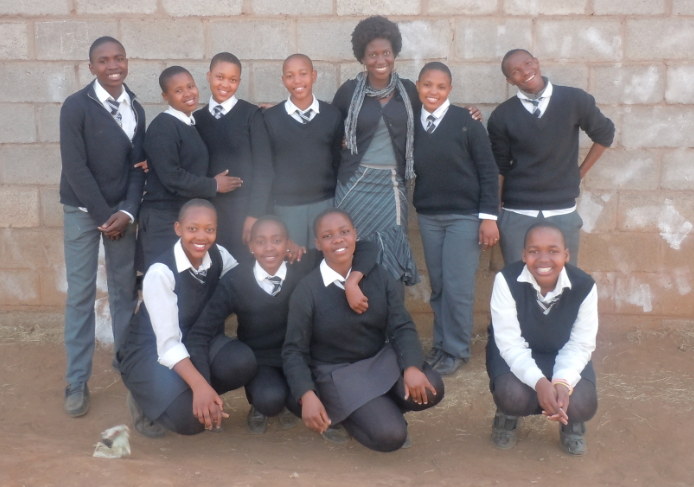 Tishina Okegbe MPP ’16 also found her way to the Peace Corps as a means to find more fulfilling work. During her third year of a doctoral program in molecular biology, Okegbe realized that she needed a job with a more tangible impact on people.

As she considered her passions for helping others and traveling, Okegbe looked into jobs in policy and aid. The Peace Corps offered the perfect marriage of travel and humanitarianism while providing the necessary experience for well-informed policy making.

Okegbe worked as an education volunteer in Lesotho, a landlocked country in the southern part of Africa. Lesotho has one of the world’s highest HIV rates, and Okegbe spent much of her time promoting HIV awareness. She helped organize a festival that used art and performance to get the more than 100 students attending engaged in understanding HIV.

Okegbe’s fellowship through the American Association for the Advancement of Science affords her the opportunity to contribute her scientific and policy knowledge to the federal government. Before coming to Princeton, Okegbe spent a year working for USAID’s global health office and her time at Princeton has given Okegbe the well-rounded education she needs to become an effective policy-maker.

“I’ve learned a lot and I’ve met a lot of people,” Okegbe said. “It’s different from my previous graduate school experience. The program is great and I’ve had such a great time.” Okegbe’s varied background helps her to appreciate what she as a student can now bring to the Princeton classroom setting, and eventually to the federal government.

“I think all my experience together has made me very well-rounded,” she said. “I’ve had exposure to academia, the technical and theoretical knowledge, I’ve gained practitioner knowledge and then I’ve had experience at the grassroots level.”

Her time both abroad and in the classroom have led her to be both idealistic enough to believe that her efforts can make a difference and realistic enough to understand that change is never an overnight process.

“Development work is hard,” she said. “Not that I thought it would be easy, but there are lots of problems and there are very smart people who are passionate and engaged and are working hard to solve the problem, but there are still a lot of problems. We need to always have that realization in the back of our minds when we try to do development work to be open and honest about the difficulties we will encounter. But that doesn’t mean we shouldn’t try.”

Okegbe, who plans to build a career in policy, thanks the Peace Corps for not only changing her career path, but also teaching her more about herself than she ever thought she could know.

“One of the taglines they tell us when we begin is that ‘Peace Corps is the toughest job you’ll ever love’ and it’s so true. It was two of the most difficult years of my life, but throughout the time that I was there, I grew so much as an individual. I learned that I have the capacity to handle much more than I thought; I could be much more compassionate than I realized; and I really had the opportunity to make a difference in my school with some of my students, who I still keep in touch with. And that is something to me that’s priceless.”