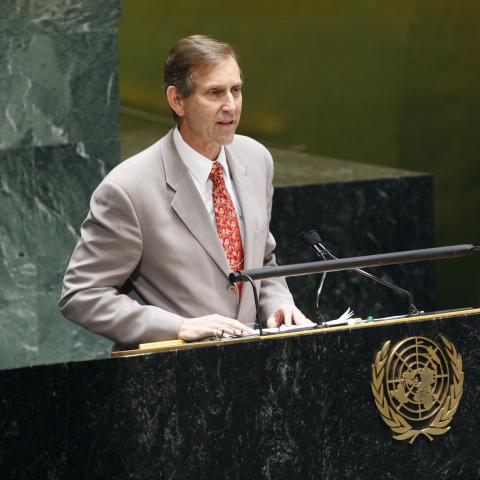 Rick Barton is the Co-Director of the Scholars in the Nation's Service Initiative (SINSI) with Kit Lunney.  He taught at the Princeton School of Public and International Affairs from 2001-5, including as the Frederick Schultz Professor from 2001-2, and returned in 2015 to lead Junior Task Forces that cover the prevention of conflict, post war reconstruction, stabilization and peace building.  His book, Peace Works - America's Unifying Role in a Turbulent World was published by Rowman & Littlefield in 2018.  Barton lectures, participates in panels, publishes and guides organizations and individuals around the world and serves on the Boards of the Alliance for Peacebuilding and the Institute for Sustainable Communities.

Barton was the first Assistant Secretary of State for Conflict and Stabilization Operations  (2011-14), U.S. Ambassador to the Economic and Social Council of the United Nations in New York (2009-11), Senior Advisor at the Center for Strategic and International Studies (2002-9), Deputy High Commissioner for Refugees at UNHCR (1999-2001), founding Director of USAID's Office of Transition Initiatives (1994-9) and a business and political leader in Maine earlier in his career.