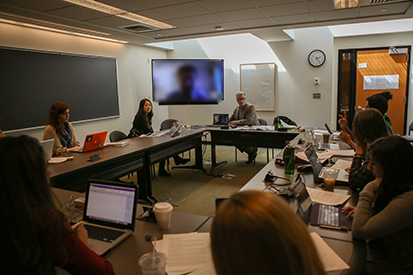 Every year citizens flee their homelands to escape political instability, violent conflicts, environmental degradation and grinding poverty. In 2015 alone, roughly 1 million migrants sought a more secure future within the European Union (EU). Over the past few months, students in a Princeton University undergraduate policy task force have been studying the challenges EU leaders face in dealing with the migrant influx — and developing potential solutions.

The task force represents the most distinctive feature of the Princeton School of Public and International Affairs’ undergraduate program and is different from a course, seminar or independent work in other departments. Task force work is often modeled on the way research is done by government staff. The group as a whole is charged with tacking a policy issue, and each student writes a research paper on one aspect of the larger problem. These individual papers satisfy the University’s junior independent work requirement.

Students in the task force “The Migrant Crisis in Europe: The International Response” were asked to examine ways in which EU leaders and other international stakeholders could successfully address the humanitarian concerns caused by the migrant flow, while ensuring the economic and political stability of EU member nations. Leading this effort was Doug Mercado, a visiting lecturer in public and international affairs who earned his Master in Public Policy from the School in 2007.