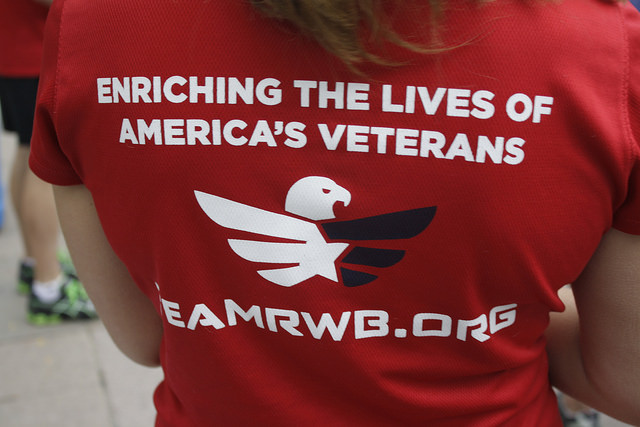 This past Friday morning, on September 11th, approximately 15 graduate students from the Princeton School of Public and International Affairs joined Princeton’s Student Veterans Organization and the local chapter of Team Red, White, and Blue for a Remembrance Workout that was nothing short of inspirational.  Just as those horrific events of September 11th, 2001 brought together Americans from all walks of life, so did this tribute workout.  In total, there were over 40 participants that gathered in Scudder Plaza to reflect on the events of 14 years ago.  We had men and women from several of the armed forces, including the Army, Navy, Air Force, and Marines, ROTC cadets from two local universities, our own graduate students and other citizens from the local Princeton Community.

The Fountain of Freedom and an American flag flown at Bagram Airfield, Afghanistan during last year’s anniversary served as the group’s backdrop.  We started the gathering by reflecting on the events that occurred on September 11th, 2001 by reviewing a descriptive chronological timeline of the morning.  Two newspapers from the USA Today and the New York Times, both from September 12th, 2001, were passed around the gathering as a stark reminder of those events.  After the reading of the events, the active duty military members and veterans introduced themselves to the group.  The discussion portion concluded with a moment of silence and a prayer, both having significance to the lone chaplain lost that morning.

We remembered the fallen through a physical workout centered on other numbers that held significance to the people we honored.  The circuit workout consisted of two rounds, in honor of the twin towers of the World Trade Center and the two paramedics that died doing their jobs responding to the tragic events.  The 6 total laps around Scudder Plaza represented roughly just over a half mile, or about 2,977 feet for the total number of lives lost that day including those in NYC, the Pentagon, and the passengers of United 93 in Pennsylvania.  The two rounds consisted of various upper and lower body exercises including push-ups, lunges, jump squats, dips, flutter kicks, and burpees.  Participants completed 411 repetitions to represent the total number of first responders lost, including firefighters, policemen, and security guards.

The co-sponsors of the event included Princeton’s own Student Veterans Organization, which exists to connect currently serving military members and veterans within the Princeton campus.  Team Red, White, and Blue is a non-profit veterans organization whose mission is to “enrich the lives of America's veterans by connecting them to people in their community through physical and social activity.”  You can learn more about this organization at www.TeamRWB.org and find out what they’re doing in the local area by joining their group on Facebook by searching “Team RWB Princeton.”

Overall, the event had an excellent turnout and many of our students worked up a decent sweat in the process of honoring and remembering the victims and families of the 9/11 tragedies.  Thanks to everyone who came out, but special thanks to the MPA1’s who rolled out of bed so early to rush back, shower, and knock out their math camp final exam prior to the start of classes this week.  Your patriotism and participation was greatly appreciated by the organizations sponsoring the event and the veterans in attendance.  It was a time at Princeton I will always remember on a day we must never forget.