Workshop Examined U.S. and Russia Interplay in the Middle East

Apr 24 2018
By Sarah M. Binder
Recent reports indicate President Donald Trump would like U.S. troops to withdraw from Syria within six months, while some on his national security team warn that leaving Syria would allow other nation states to exert greater influence over the war-torn country. As Syria and the rest of the Middle East faces fundamental political challenges, it appears likely that U.S. and Russian interests in the region will compete. 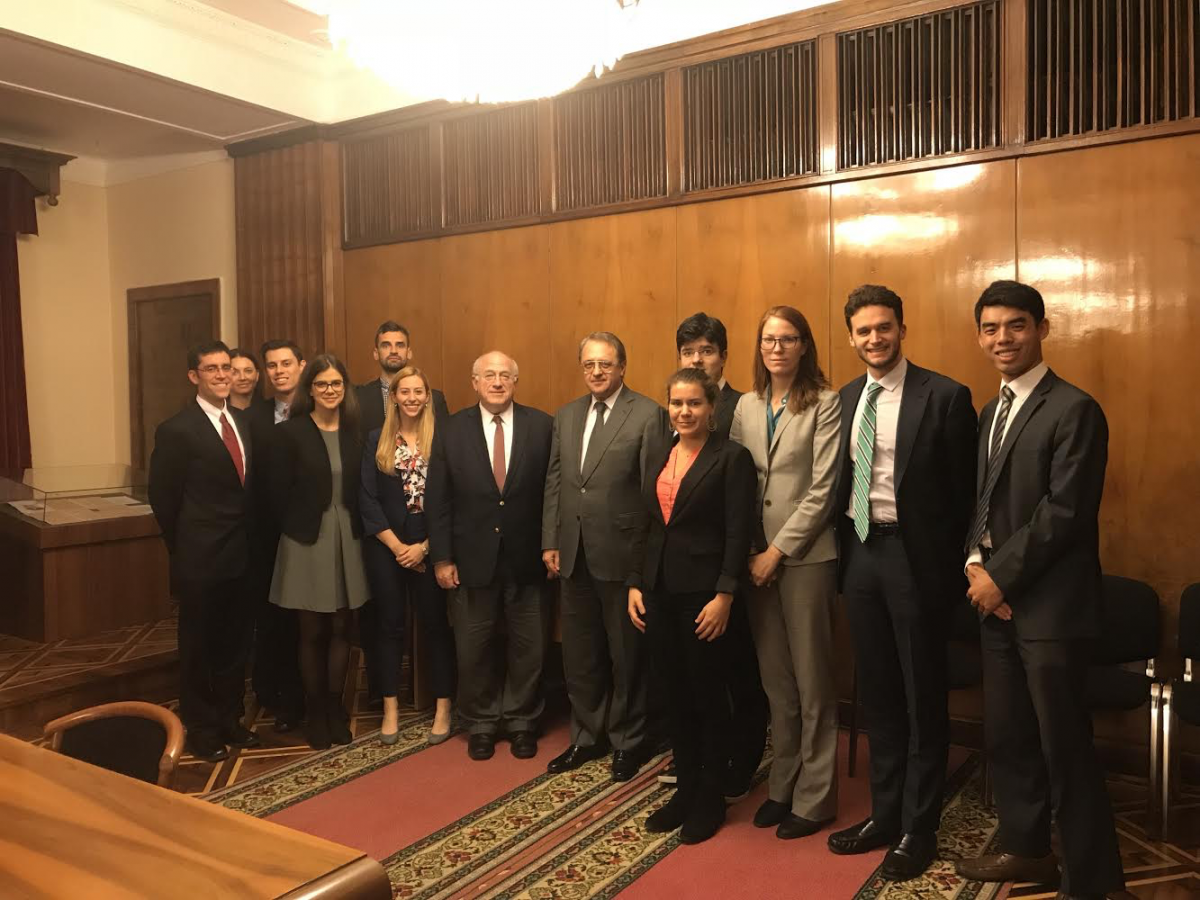 A fall 2017 graduate workshop taught by Professor Daniel C. Kurtzer, former U.S. ambassador to Israel (2001-2005) and Egypt (1997-2001), assessed the state of play in the interaction between the U.S. and Russia in the Middle East. By the end of the workshop, the students developed and presented recommendations to policymakers.
Andi Zhou MPA ’18, who will pursue a Ph.D. in political science, found the workshop relevant to his interests in international relations and security issues. “In addition to being painfully topical, it allowed me to build on prior experience working on U.S.-Russia relations while providing an opportunity to expand my knowledge of the Middle East. Learning the intricacies of how U.S. policymaking toward the Middle East has evolved is very useful context.”
Early in the semester, course readings and student presentations examined the issue from historical and contemporary contexts, covering topics such as post-war U.S. and Soviet relations, competition in the Middle East during the Cold War, the Israeli-Palestinian conflict, and strategic considerations such as the Islamic State of Iraq and Syria, non-proliferation, and oil.
“I wanted the students to internalize the process of policymaking, what I call the mental checklist that policymakers should go through — starting with a definition of interest and ending up with a feedback loop to understand whether a policy is working,” Kurtzer said. “Second, I tried to get them to understand the real-world challenges that a policy process faces. There is a process, and then there are all of the uncertainties both internal and external to that process.”
Over fall break, Kurtzer’s workshop allowed students to conduct field-based research with individuals who have familiarity with or direct responsibility for Russian policy in the Middle East. The class traveled to Moscow, where they held a student dialogue at Moscow State University and a meeting at the Institute of Oriental Studies of the Russian Academy of Sciences. They also met with Russian Deputy Foreign Minister Mikhail Bogdanov, whose “explanation of Russian foreign policy views was as shrewd as it was provocative,” Zhou said.
Additional meetings (for a total of 25 throughout the trip) were held with key think tanks; Emil Gelebo of the embassy of Sweden in Moscow; and Hüseyin Diriöz, ambassador to Russia from the Republic of Turkey.
Zhou also found Kurtzer’s interactions with Bogdanov to be highly instructive, noting his responses to Bogdanov were “nothing short of a masterclass in diplomacy.”
Zhou helped to structure the presentation the workshop students gave to U.S. State Department officials and House Foreign Affairs Committee members in Washington, D.C., in December 2017, including Michael Ratney, the U.S. special envoy for Syria and deputy assistant secretary of state for Levant, Syria, Israel, and Palestine Affairs.
“When a bunch of smart students have 12 weeks to analyze what policymakers have been doing for some period of time, it is a way of measuring what the policymakers have been doing against what the students come up with,” Kurtzer explained. “This is serious training; we do not pretend that it is the real world, but we try to make it as real-world as possible. What the policymakers gain is an understanding that in a real-world training experience, there actually is some utility for what they do.” 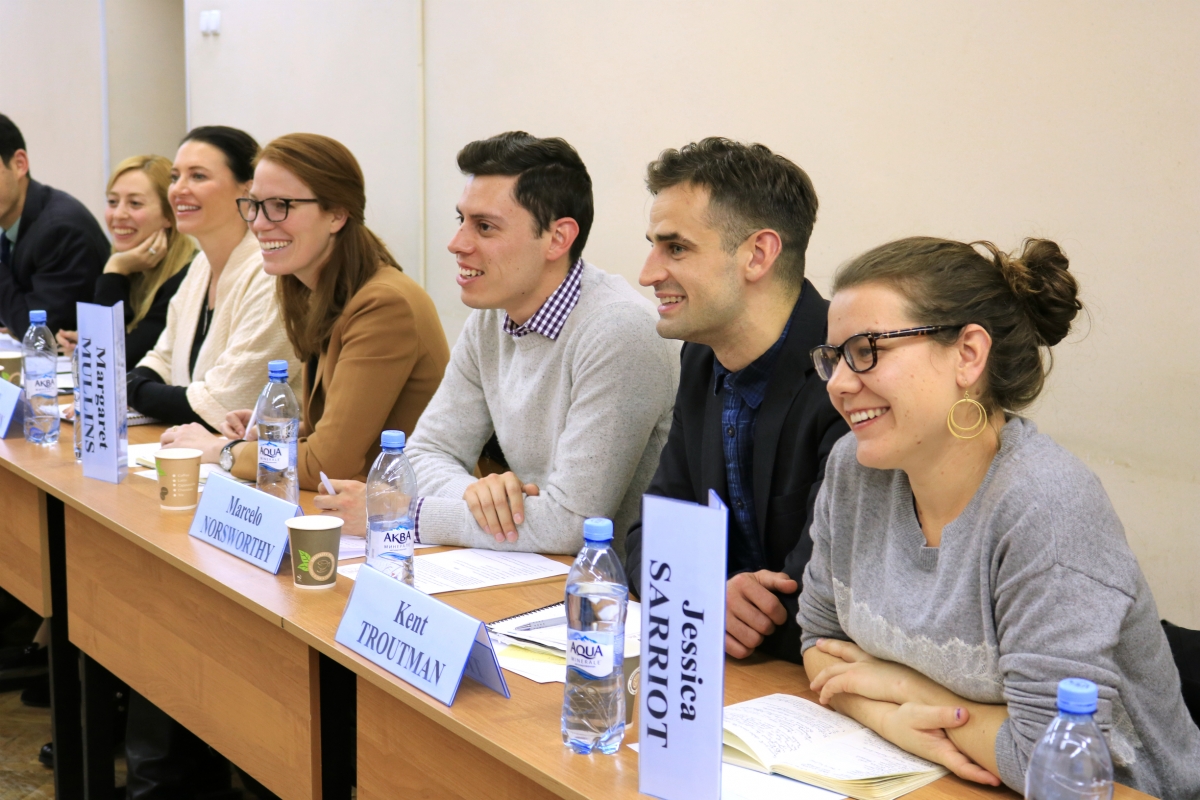 The students made several policy recommendations, detailed in their final report, “Syria and Beyond: Managing Russian Ambitions in the Middle East.” Their specific recommendations supported three main strategies: 1) reasserting U.S. leadership and credibility by bolstering U.S. relations with Turkey, Saudi Arabia, Israel, Iraq, Jordan, and Egypt; 2) maintaining a military and diplomatic presence in Syria to prevent a resurgence of ISIS and al-Qaeda; and 3) challenging Russia to restrain Iran.
“The staff we briefed were eager to engage and offered substantive feedback that shaped our final report,” Zhou said. “It was incredibly rewarding to see policymakers embrace our effort so warmly.”
Zhou’s top takeaway from the workshop is one that applies not only to his fields of research but also to the general policymaking process.
“Competence and good intentions rarely come together in the right place at the right time, and even when they do, it’s usually still not enough to solve the world’s most difficult problems,” he said. “The ‘best’ ideas are often simply the least of the worst. And progress, when it does come, will inevitably be dispiriting and insufficient — but that doesn’t mean it isn’t worth doing.”