Join Us Today! From Ferguson to Dallas to Charlotte: Racial Justice and Policing in America 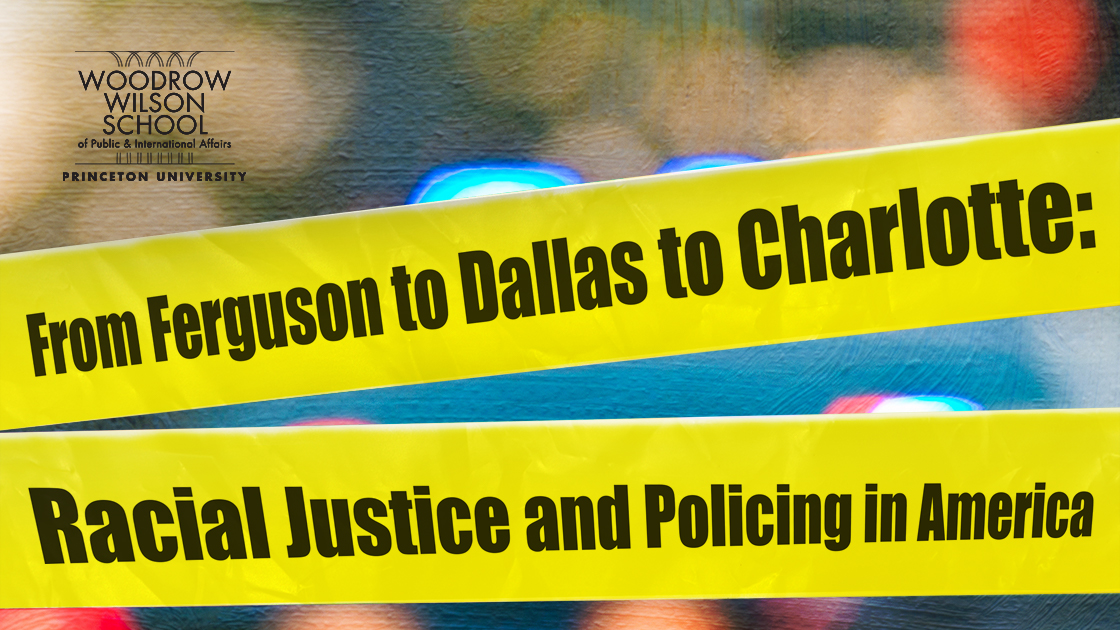 “From Ferguson to Dallas to Charlotte: Racial Justice and Policing in America” will convene a diverse and distinguished panel to share their unique perspectives on the recent policing crises that have and continue to occur across the United States. More than two years after the shooting of Michael Brown in Ferguson, Missouri, the relationship between law enforcement and African American citizens remains one of the most important issues facing our country today.

This timely policy forum is designed to bring together prominent voices, with the goal of illuminating common ground and inspiring attendees to continue the conversation in their own communities. The discussion will challenge our collective and individual thinking — likely asking more questions than it will answer.

The following research scholars, former and current senior-level law enforcement, activists, policymakers, students and community members will examine issues critical to ensuring that law enforcement and communities work together to guarantee the safety and well-being of all. Through panels focusing on communication relations and accountability, issues of racial justice, profiling, human rights and effective law enforcement will be explored.

From Ferguson to Dallas to Charlotte: Racial Justice and Policing in America
December 9, 2016

Karen Anderson is the executive director of the American Civil Liberties Union (ACLU) of North Carolina. Anderson began her career as a corporate litigator in Washington, D.C. — first with Nixon, Hargrave, Devans and Doyle (now Nixon Peabody, LLP) and then with Dickstein, Shapiro and Morin (now Dickstein Shapiro, LLP). She moved into nonprofit management as the associate director of Prairie State Legal Services, a legal services organization serving low income and elderly clients throughout northern and central Illinois. She has since worked with and for a number of nonprofit organizations (including the University of Denver, Red River Theatres, Urban Peak homeless shelter and the New Hampshire Public Defender), leading or consulting on in-house initiatives in strategic development and planning, financial controls, business analysis, information technology integration, staff development and risk management. Anderson is a sought-after adviser on shaping organizations’ infrastructure to meet institutional goals. A native of Jamaica, Anderson was raised in Rochester, New York. She is a graduate of Bryn Mawr College and the University of Chicago Law School, and studied philosophy at Edinburgh University.
Antonio (Tone) Bellamy was born and raised in the beautiful slums of Trenton, New Jersey. He is a graduate of Trenton Central High School and currently enrolled at Cairn University, where his ambition is to be the first in his family to earn a college degree. As a former gang member-turned-minister, he skillfully connects with people from the block to the boardroom. Bellamy has served in various community-strengthening capacities throughout the greater Mercer County area for the past 10 years, including speaking at events addressing the need for healthy relations between cops and community. From 2008 to 2010, he served as policy council board chairman for the Children’s Home Society of New Jersey, where he provided contextualized advice on how to best serve needy families. In addition, he serves as an elder and facilities associate at Stone Hill Church of Princeton. He is also a local music artist who uses hip-hop as a medium to offer hope to hurting people. Bellamy is passionate about lovingly engaging the most misunderstood, misrepresented and marginalized people in our society, the street, the strays and the stressed. Whether it’s coaching local little league baseball teams, serving in the local church, inspiring people at hip-hop concerts or conveying a speech to an audience at a prestigious university, he desires to leave a legacy of loving people. Of all the roles he serves in, the most rewarding by far is being a husband to his beautiful wife Diane and their three children: Promise, age 8; Serenity, age 6; and Joshua, age 3.

LaTanya Buck currently serves as dean for diversity and inclusion within the Office of Campus Life at Princeton University. Buck is a member of the campus life leadership team, and is responsible for providing a vision and integrated programs for diversity, equity and inclusion to enhance campus life mission and goals, as well as to contribute to the achievement of the University's diversity goals.  Buck supervises the directors of the Carl A. Fields Center for Equality and Cultural Understanding; Lesbian, Gay, Bisexual and Transgender (LGBT) Center; and Women's Center. She is a member of the campus-wide Senior Diversity Practitioners Group and is one of the several administrators who receive and respond to reports of bias. Additionally, she oversees the university-wide Campus Conversations on Identities initiative.

Paul J. Fishman was nominated by President Barack Obama as the United States Attorney for the District of New Jersey in June 2009; he was confirmed by the U.S. Senate on October 7, 2009 and sworn in on October 14, 2009. As U.S. Attorney, he is responsible for overseeing all federal criminal investigations and prosecutions and the litigation of all civil matters in New Jersey in which the federal government has an interest.  Mr. Fishman supervises a staff of approximately 145 attorneys and 115 support personnel in Newark, Camden, and Trenton. In addition to his service as U.S. Attorney, Mr. Fishman is a member of the Attorney General's Advisory Committee of U.S. Attorneys ("AGAC"). He served as Vice-Chair of the AGAC from 2009-2011, and Chair from 2011-2012. Created in 1973, the AGAC represents the voice of the U.S. Attorneys and provides advice and counsel to the Attorney General on policy, management, and operational issues affecting the offices of the United States Attorneys across the country.

Abigail Gellman is a senior history major pursuing a certificate in African American studies. For nine months before her freshman year, Gellman participated in Princeton’s Bridge Year Program in Senegal, volunteering at several organizations that supported vulnerable children and immersing in the local language and culture while living with a homestay family. At Princeton, in addition to her coursework and time spent singing with her coed a cappella group, Gellman cares deeply about addressing the injustices of the carceral state and seeking to make America’s criminal justice system more equitable and humane. Gellman is the co-president of Princeton’s Students for Prison Education and Reform (SPEAR), for which she leads meetings, oversees research and advocacy projects and organizes an annual conference. Gellman also corresponds with someone in solitary confinement, tutors incarcerated people weekly at a youth correctional facility through the Petey Greene Program and co-taught a six-week résumé-building and interview preparation course at a women’s prison in 2015. Gellman also worked on dialogue programming as an intern at the Carl A. Fields Center for Equality and Cultural Understanding for two years. After her freshman and sophomore years, she took advantage of Princeton’s resources to return abroad through the French department’s Aix-en-Provence language immersion program and the International Internship Program, through which she worked for the Women’s Microfinance Initiative in Uganda. She received an Arthur Liman Undergraduate Fellowship to work as an investigative assistant at Brooklyn Defender Services last summer, where she investigated cases to help defend indigent clients, canvassing for video surveillance and interviewing complaining witnesses. She is considering law school and intends to pursue a career in social justice and criminal justice reform.
Benjamin Todd Jealous, former president and CEO of the NAACP and current partner at Kapor Capital — where he has been an adviser for multiple tech startups working to close gaps of access, opportunity and participation for everyday Americans — serves as the John L. Weinberg/Goldman Sachs & Co. Visiting Professor and visiting lecturer in public and international affairs at Princeton University’s Woodrow Wilson School. Jealous, in addition to serving as partner at Kapor Capital, also is currently a senior fellow at the Center for American Progress, where he has contributed to developing policy solutions that ensure equity and opportunity for all Americans. Jealous was named a Young Global Leader by the World Economic Forum in 2013 and received the 2012 Puffin/Nation Prize for Creative Citizenship, which is given to an individual who has challenged the status quo through distinctive, courageous, imaginative and socially responsible work of significance. Jealous is co-author of the book “Reach: 40 Black Men Speak on Living, Leading, and Succeeding,” named a best-seller by The New York Times and The Washington Post. He holds a Bachelor of Arts in political science from Columbia University and a Master of Science in comparative social policy from Oxford University, where he was a Rhodes Scholar.

Stefanie Karp, who has an extensive law enforcement background as a lawyer, investigator and university official, is director of operations for the Princeton University Department of Public Safety and is responsible for the department's day-to-day operations and second in command to Executive Director of Public Safety Paul Ominsky. Karp clerked for a judge in the criminal division of the Court of Common Pleas in Philadelphia until 1995, when she became a deputy attorney general in the drug prosecution and forfeiture division of the Pennsylvania Office of Attorney General. In 1996, she became a narco tics agent for Pennsylvania's Bureau of Narcotics Investigation and Drug Control. From 1998 through 2000, Karp worked for LexisNexis in New York City as a senior business information consultant and an account manager focusing on investigative, corporate and legal clients. Karp joined PricewaterhouseCoopers in 2000 as a senior associate specializing in fraud prevention, detection, investigation and deterrence. She returned to Philadelphia in 2002 as a syndicator in the financial services group at AON Risk Services, Inc., of Pennsylvania. In 2003, she became an assistant district attorney with the Philadelphia District Attorney’s Office. In June 2008, Karp became director of operations and external affairs for the Division of Public Safety at the University of Pennsylvania, acting as chief of staff.

George L. Kelling is professor emeritus in the School of Criminal Justice at Rutgers University, a senior fellow at the Manhattan Institute, professor emeritus at Northeastern University and formerly a fellow in the John F. Kennedy School of Government at Harvard University. Kelling has practiced social work as a child care worker and a probation officer, and has administered residential care programs for aggressive and disturbed youths. In 1972, he began work at the Police Foundation and conducted several large-scale experiments in policing, most notably the Kansas City Preventive Patrol Experiment and the Newark Foot Patrol Experiment. The latter was the source of his contribution to his most familiar publication in The Atlantic, “Broken Windows,” with James Q. Wilson. During the late 1980s, Kelling developed the order maintenance policies in the New York City subway that ultimately led to radical crime reductions. Later he consulted with the New York City Police Department as well. These experiences led to his book, “Fixing Broken Windows: Restoring Order and Reducing Crime in Our Communities,” which he has published with his wife, Catherine M. Coles. Kelling has worked in or consulted with many of the major police departments in the United States. His most recent book is “Policing in Milwaukee: A Strategic History.” He has two children and four grandchildren. Kelling is a graduate of St. Olaf College with a bachelor’s degree, a graduate from the University of Wisconsin-Milwaukee with a Master of Social Work, and a graduate from the University of Wisconsin-Madison with a doctoral degree.