Ten students at Princeton University have been selected to the 2018 cohort of the Scholars in the Nation’s Service Initiative (SINSI).

Established in 2006, SINSI is designed to encourage, support and prepare the nation’s top students to pursue careers in the U.S. federal government, in both international and domestic agencies. Through rigorous academic training integrated with work experience, the goal of the highly competitive scholarship program is to provide students with the language and workplace skills needed to succeed in the public policy arena.

THE CLASS OF 2018 GRADUATE SCHOLARS ARE: 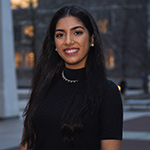 Dina Chotrani ’18, of Secaucus, New Jersey, is a Woodrow Wilson School concentrator focusing on global health and humanitarian assistance. She also is a candidate for certificates in Global Health and Health Policy, History and the Practice of Diplomacy, and Entrepreneurship, and is the 2018 Terrence A. Elkes Graduate Scholar in the Nation’s Service. During summer 2017, Chotrani interned at an immigration law firm, conducted research on human rights and forced migration for The 2018 New Global Agenda, and worked on affordable housing policy at the Manhattan Borough President’s Office. She has also worked in gender equality advocacy efforts in Mexico City and on the United Nations Ivy STEM Connect pilot programs in Tanzania and Rwanda for the U.N. Girls’ Education Initiative. On campus, Chotrani is a student fellow in the Liechtenstein Institute on Self-Determination’s Project on Women in the Global Community and an executive board member of the Ivy Council. She also has served as a vice president for Princeton Effective Altruism, a programming director for Princeton Development Lab, and a member of the charity committee for the Class of 2018’s Undergraduate Student Government. 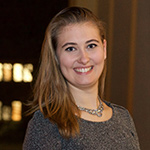 Caroline Jones ’18, of Princeton, New Jersey, is a senior in the Woodrow Wilson School focusing on conflict and cooperation and is pursuing certificates in Latin American Studies and the History and Practice of Diplomacy. Jones was the SINSI Intern Class of 2017 Tom A. and Andrea E. Bernstein ’80 Scholar and worked in New York City at the U.S. State Department's Mission to the United Nations. During summer 2016, she interned at CNN’s Fareed Zakaria GPS as a recipient of the Ferris Grant for Summer Internships in Journalism. The previous summer, she worked at the Wilson School's Innovations for Successful Societies research program on a variety of case studies about justice and security sector reform. Jones is a recipient of the Shapiro Prize for Academic Excellence. She sings with both the Princeton University Glee Club and Chamber Choir and is a member of Princeton's figure skating team. 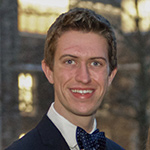 John L. “Newby” Parton ’18, of McMinnville, Tennessee, is a Woodrow Wilson School concentrator and certificate candidate in Values and Public Life and Urban Studies. A 2016 recipient of the Shapiro Prize for Academic Excellence, Parton has focused his academic work on the court system, criminal justice reform, and journalism. In summer 2017, as the SINSI Intern Class of 2017 Frederick P. Hitz ’61 Scholar, Parton worked in the Disability Rights Section of the U.S. Department of Justice, Civil Rights Division, and he intends to pursue a joint MPA/J.D. degree and career in civil rights law. At Princeton, he has worked as a dormitory assistant, tour guide, economics tutor and a counselor for a STEM camp serving minority and low-income students. His leadership positions have included head opinion editor for The Daily Princetonian, president of Speak with Style and president of a debate group. 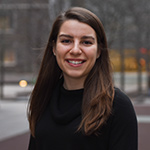 Caitlin Quinn '18, of San Antonio, Texas, is a Woodrow Wilson School concentrator pursuing certificates in Latin American Studies and Portuguese. A recipient of the Streicker International Fellows Fund and the Council of American Ambassadors International Affairs Fellowship, she is primarily interested in U.S. foreign policy and diplomacy. Quinn spent nine months in Salvador, Brazil, before her freshman year through the Princeton University Bridge Year Program. In Salvador, she learned Portuguese and volunteered as an English teacher. She returned to Brazil in summer 2016 to intern as a translator in Rio de Janeiro, and she also has pursued summer internships with a newspaper in Málaga, Spain, and with a public diplomacy bureau of the U.S. State Department in Washington, D.C. She spent her junior spring semester studying abroad at Queen's University Belfast in Northern Ireland. As an undergraduate, Quinn has served with various student groups at the Pace Center for Civic Engagement. She works at Princeton's Writing Center and participates in two fellowship programs at the Liechtenstein Institute on Self-Determination. In addition to Portuguese, Quinn also speaks Spanish. 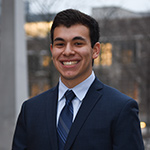 Michael Asparrin ’19, of Ewing, New Jersey, is a Woodrow Wilson School concentrator focusing on conflict and cooperation, and is pursuing certificates in History and the Practice of Diplomacy and Spanish Language and Culture. He is the Class of 2018 Tom A. and Andrea E. Bernstein ’80 Scholar. On campus and through summer internships, Asparrin has worked to bring access to social, legal and educational opportunities for some of the country’s most marginalized and underrepresented communities. He is particularly interested in the interaction that government, nonprofit organizations and local communities have in creating and implementing significant and lasting change. In summer 2017, Asparrin interned at the nonprofit organization Make the Road New Jersey through the Princeton Internships in Civic Service program, where he worked with working-class and low-income immigrant community members in Elizabeth, New Jersey. On campus, Asparrin is chair of the Association of Latinx Activism and Service, serves on the Princeton Latinos y Amigos executive board, is a volunteer ESL tutor with the Pace Center’s El Centro student group, is a member of the Scholar’s Institute Fellowship Program and serves as a student representative on the Priorities Committee in the Office of the Provost. 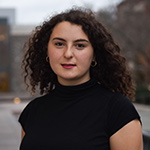 Mikaela Gerwin ’19, of New York, New York (Manhattan), a history concentrator pursuing a certificate in Global Health and Health Policy, is the Class of 2018 Dean’s Scholar in the Nation’s Service. Prior to starting at Princeton, Gerwin spent a gap year teaching English and working on community health programs in Urubamba, Peru, through a Princeton Bridge Year Fellowship. She speaks Spanish and Hebrew fluently. Gerwin has served as a student leader at Princeton’s Center for Jewish Life, a weekly ESL teacher at El Centro in Trenton, an intern for Princeton’s Women’s Center, a peer academic advisor at Forbes College and an Outdoor Action leader. She has acted in several campus performances, including a historical walking tour of race and protest at Princeton, which she helped write. In summer 2016, Gerwin interned with Boston Healthcare for the Homeless where she worked with doctors and case managers to ensure homeless individuals received primary care and housing services in both clinics and on the streets of Boston. Gerwin will be studying abroad at Universidad Autonoma de Madrid in spring 2018. 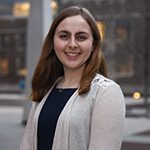 Julia Herrle ’19, of Wexford, Pennsylvania, is a junior in the Woodrow Wilson School pursuing certificates in Environmental Studies and in Values and Public Life. The Class of 2018 Frank C. Carlucci ’52 Scholar, she is passionate about improving global food security through sustainable agricultural development and emergency food assistance. Herrle spent the summer of 2017 interning in Nepal at Bioversity International, a global agriculture research-for-development organization, conducting research on the effects of agrobiodiversity on ecosystem services. The previous summer, Herrle taught English in Paris, France. On campus, Herrle is a mentor and the Big Sibs coordinator for Community House Big Sibs, a program that aims to foster relationships between local elementary students and Princeton undergraduate mentors, with the broader goal of working to close Princeton’s minority achievement gap. She also is a project leader and Friendly Visitors volunteer for Meals on Wheels. Herrle is a supervisor for TigerCall in the Office of Annual Giving, leads first year orientation trips as an Outdoor Action leader, and is involved in Princeton Women in Economics and Policy. 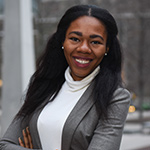 Tylor-Maria Johnson ’19 of New York, New York (Brooklyn), is a sociology concentrator and a certificate candidate in African American Studies and American Studies. The Class of 2018 Gilbert S. Omenn ’61 and Martha A. Darling MPA ’70 Scholar, she spent the summer of 2016 interning at the Harlem Community Justice Center where she assisted in planning and facilitating community events for incoming parole court clients and their families. In the summer of 2017, she participated in an international internship at the European Roma Rights Center in Budapest, Hungary where she conducted research about Romani school segregation. At Princeton, Johnson has participated in the Princeton Private Prisons Divestment Campaign. She serves as a member of the Black Student Union Executive Board where she helps to create and advertise student events that promote the growth of the black community on campus. She sings with the Princeton University Gospel Ensemble. She also is a member of the Scholar’s Institute Fellowship Program. 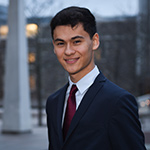 Aaron Xiao Sobel ’19, of Fairfax, Virginia, is a junior in the Woodrow Wilson School pursuing certificates in History and the Practice of Diplomacy and Values and Public Life. Sobel is the Class of 2018 Marlene Hess and James D. Zirin ’61 Scholar. Sobel has spent most of his life in Southeast Asia, where he developed his academic interests in development and legal institutions. In the summer of 2017, Sobel interned for the U.S. Attorney’s Office for the District of Columbia where he wrote motions, findings, proffers for plea agreements, sentencing memoranda, direct- and cross-examinations and conducted legal research. On campus, Sobel is a team captain for Princeton Mock Trial, a peer representative to the Honor Committee, the chair of the Student Groups Committee for the Undergraduate Student Government, and chargé d’affaires (formerly undersecretary-general) of the Princeton Model United Nations Conference. 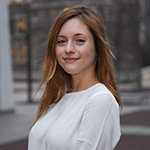 Sophie Troyka ’19, of Saline, Michigan, is a junior in the Woodrow Wilson School and a certificate candidate in Environmental Studies. Troyka, the Class of 2018 Frederick P. Hitz ’61 Scholar, is focused on sustainable agriculture and the nexus of meat consumption, animal welfare, human health, and the environment. She is the marketing lead for TigerLaunch, Princeton University’s national entrepreneurship competition, and is interested in the potential for technological innovation to solve global environmental issues, including the development of stem cell meat alternatives to factory farming. She is an ecology representative for the Office of Sustainability, which aims to promote the integration of sustainability into campus life, and co-captain of the Princeton Equestrian Team. She spent her 2016 internship in a software start-up in Tel Aviv and the previous summer studying French in Aix-en-Provence and interning at a law firm.

ABOUT THE SCHOLARS IN THE NATION’S SERVICE INITIATIVE

SINSI recruits Princeton students from a broad range of academic backgrounds – not only from the Woodrow Wilson School of Public and International Affairs, but also concentrations as diverse as astrophysical sciences, chemical and biological engineering, chemistry, molecular biology, English, politics and Near Eastern, East Asian and Latin American studies.

The core element of the graduate program is a two-year SINSI-supported fellowship with an executive branch department or agency. In addition, SINSI provides funding for 8- to 10-week summer internships with the federal government each year to selected undergraduate scholars. With support from SINSI, scholars select and apply to a U.S. government agency in their area of interest. Internships are available to Princeton undergraduates from all majors and fields of study.

Since the first SINSI cohort in 2007, nearly 70 student-scholars have pursued opportunities with the Departments of State, Defense, Treasury, Education, Justice, Agriculture, Health and Human Services and Housing and Urban Development; the intelligence community; the U.S. Agency for International Development (USAID); the Millennium Challenge Corporation; the National Academy of Sciences; the U.S. Fish and Wildlife Service; the Environmental Protection Agency; the President’s Council of Economic Advisers; the Office of Management and Budget; the Joint Chiefs of Staff; the National Aeronautics and Space Administration; the National Institutes of Health; and the White House. Within these agencies, SINSI scholars have worked on a broad range of issues.

For more information on SINSI, visit the initiative’s website.