Affordable child care and flexible work schedules have all been topics of debates in the 2016 U.S. presidential campaign.

Yet, according to a new study by Princeton University and Harvard University, the average American worker is indifferent to flexible work schedules and instead prefers a set 40-hour workweek.

It comes down to pay: Most workers, men and women, aren’t willing to take even a small pay cut to set their own schedules. However, if given the option to work from home, many workers — especially women — would take an 8 percent wage cut to do so.

The findings, published by the National Bureau of Economic Research (NBER), also show that workers consistently dislike irregular work schedules set by employers on short notice. They would even give up one-fifth of their salary to avoid working evenings or weekends. Nearly half of jobseekers would not take an irregular-schedule job even if it paid a quarter more than a 9 a.m. to 5 p.m. job. This is true even of workers who currently have irregular work schedules.

"Our findings show that flexible scheduling is not valued by many workers in the sense that they prefer a little extra income rather than a more flexible workplace. However, we find that for a relatively small number of workers, flexible schedules are really important," said co-lead author Alexandre Mas, professor of economics and public affairs in Princeton’s Woodrow Wilson School of Public and International Affairs. 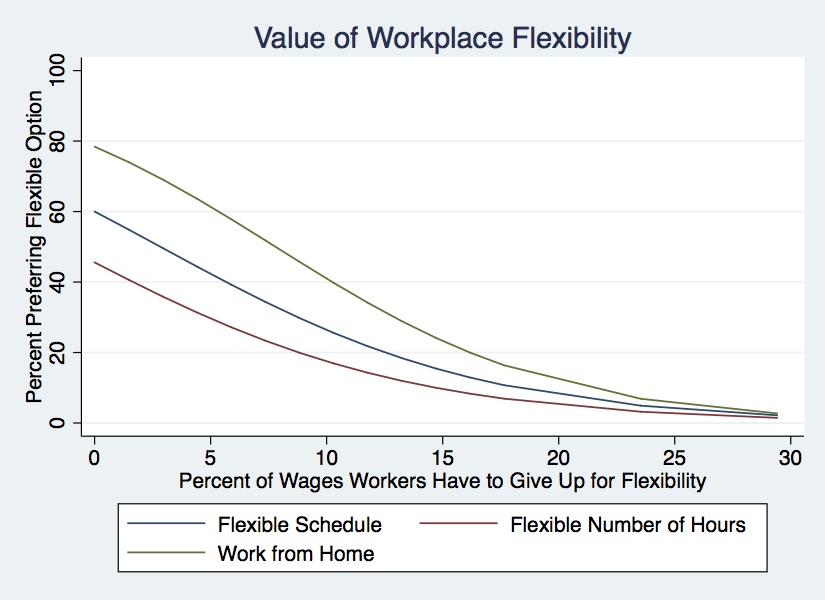 Mas and Pallais carried out their study via a real-life hiring process for a national call center. The call center was used to conduct a labor-market survey (unrelated to the study) in 2016, which was made clear to applicants. Approximately 7,000 people applied for the positions online.

When applying, applicants were asked to state their preference between two positions: a traditional 40-hour, weekday 9 a.m.-5 p.m. onsite job, or a randomly chosen work schedule that included one of the four options listed below.

Jobseekers were told these choices would not be used to make hiring decisions. Wages varied between the traditional and alternate work schedules. Applicants could apply for jobs offered at the maximum salary, or, they could apply for the alternate-schedule jobs, which were lower in salary by 25-cent increments.

The researchers also developed a module in the Understanding America Study, a nationally representative sample, which allowed them to obtain such information as whether workers had children at home.

Overall, the "bliss point" for workers seems to be a 40-hour workweek, according to the findings. Of all the worker-friendly arrangements, workers are willing to pay the most — 8 percent — to work from home. Women, especially those with young children, prefer this option.

Average workers do not prefer making their own schedule or setting their own hours or schedule. In a separate focus group, Mas and Pallais found people didn’t want to "force themselves to work" a certain number of hours. However, there is a subset of workers who would give up some wages — about 10 percent — to make their own schedules.

In general, workers very much dislike unpredictable schedules set by employers to the point of giving up 20 percent of wages to avoid an irregular schedule set by a boss. Forty percent of applicants said they would not choose a job like this, even if it paid 25 percent more than a traditional position.

Even those workers who dislike irregularity the least would give up 10 percent of their income to avoid this type of arrangement. Interestingly, workers dislike irregular schedules because of having to work evenings and weekends and not because of the scheduling unpredictability.

"While much of the discussion about work-life balance has focused on providing workers with more flexibility and more predictability in scheduling, we find that this isn’t what most workers want. Most workers simply want to work during traditional working hours," Pallais said.

While the paper does not make specific policy recommendations, it does raise questions about whether irregular scheduling should be regulated and if flexibility polices should be expanded.

"For example, it might be worth thinking about the benefits and costs of policies that require wage premiums for short-notice scheduling, or evening and weekend work. Our findings suggest that the benefits of these policies to workers are potentially large," Mas said.

Even though some companies offer work-from-home options, there may be financial reasons behind why others don’t.

"The fact that most industries still don’t offer work-from-home options suggests it may be costly to do so. Our estimates imply that it would cost 21 percent of wages for employers to switch over to work-at-home positions because there are workers who are willing to take a pay cut that large who do not work from home," Mas said.

"Valuing Alternative Work Arrangements" was published as a working paper Oct. 3 by the NBER.