Artist Walter Hood discussed his proposed design for a new campus installation about Woodrow Wilson at a recent public talk at Princeton University’s Friend Center. Co-sponsored by the Woodrow Wilson School of Public and International Affairs and the Campus Iconography Committee, the talk presented an opportunity for the community to learn more about the sculpture. Focusing on both the negative and positive aspects of Wilson’s legacy, the piece will be erected adjacent to the Fountain of Freedom on Scudder Plaza, with construction beginning next month. 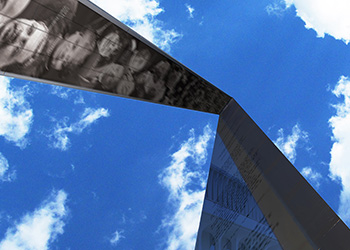 The 39-foot piece will be a vertical sculpture of two columnar elements, one leaning on the other, which creates a tension between the two and prevents a feeling of equilibrium, Hood noted in his lecture. Text from Wilson’s writings will run in a serial manner on the outside of both columns, etched in highly reflective and durable stone glass. Unedited and reflecting the full range of Wilson’s views, the quotes focus on education, labor, role of government, segregation, slavery, international relationships, and women’s suffrage.

“Our country is built on a lot of dark things that we don’t like to talk about; it’s the light that we always talk about. We are thinking perhaps, through the support of one column on the other, there can be a dialectical, rather than polemical, conversation,” said Hood, who is creative director and founder of Hood Design Studio in Oakland, Calif.

At the sculpture’s center, the two vertical planes will face each other; one is a glass lenticular surface with images of Wilson’s contemporaries who were critical of his views, particularly about race and gender. The opposite side, composed of stainless steel, will contain quotes by these detractors regarding negative actions Wilson took.

“These are people we feel who were pushing Wilson to be better and to do better,” Hood explained. “These are powerful words, and together, they force us not to choose sides but to try to understand. That is the genesis of the piece.”

Hood also shed light on the history of the project and his collaborations with individuals from the University community. In April 2016, the University’s Board of Trustees adopted the report and recommendations made by the Wilson Legacy Review Committee on how the University should recognize both the negative and positive aspects of Wilson’s legacy, including placing a permanent “marker” on Scudder Plaza beside Robertson Hall.

A committee was formed, chaired by Woodrow Wilson School Dean Cecilia Rouse and University Architect Ron McCoy and made up of faculty, staff, and students. After a competition in which seven firms submitted options, the committee selected Hood’s proposed design for its honest reflections and its creative approach. 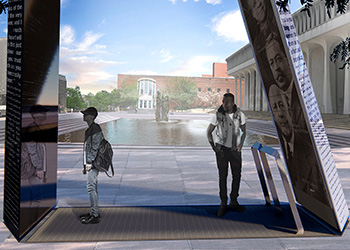 To inform Hood’s design process, focus groups comprised of Princeton students, faculty, staff, alumni, and the arts community met with Hood and his team over the past two years.

Hood hopes the sculpture will generate dialectical conversation and allow the campus community and visitors to note something new each time they visit. “There are a lot of meanings that come through the sculpture and the text. There is not a singular response that I am looking for; I’m hoping there is a multiple set of readings and different interpretations that people bring to it,” Hood said. “Over time, we’re hoping that it becomes part of Scudder Plaza in a powerful and meaningful way.”