'A Bee, a Tree, What’s In It For Me?' Class Examines Environmental Policy

On a morning in March, Professor Michael Oppenheimer pointed to a photograph he took while flying over the North Pole. 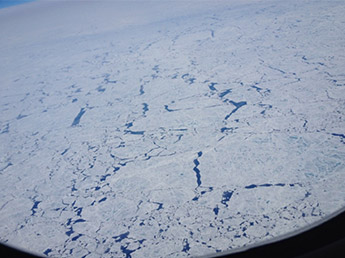 A mosaic of fragmented ice stretched across the projection screen. The blue-green sea of the central Arctic Ocean flowed to the surface, visible between small and large pieces of ice. Once a thick, solid ice sheet, the expansive ice was fractured thanks to rising global temperatures.

“How do we know humans are responsible for these changes?” Oppenheimer, one of the world’s foremost experts on climate change, asked a class of 140 undergraduate students at Princeton University with interests in science, public policy and law.

In the spring course “The Environment: Science and Policy,” Oppenheimer teamed up with ecology expert David Wilcove to examine a number of environmental concerns — from warming seas to air pollution to deforestation to natural disasters — through a policy lens.

The course is an elective in a list of science-policy classes required for all undergraduate majors in the Woodrow Wilson School of Public and International Affairs. For some students, it’s the first time they’ve explored science policy, taking a deep dive into trade agreements and international treaties related to the environment.

“At first, I didn’t understand the relationship between science and policy,” said Diego Negron-Reichard, a junior majoring in the Woodrow Wilson School. “But the questions and problems that Dr. Oppenheimer and Dr. Wilcove present us with are truly challenging and involve an array of economic, social and political considerations. Environmental policy demands creativity and out-of-the-box thinking, and the course does just that.”

Oppenheimer, the Albert G. Milbank Professor of Geosciences and International Affairs and the Princeton Environmental Institute, and Wilcove, a professor of ecology and evolutionary biology and public affairs and the Princeton Environmental Institute, presented students with real-world science policy problems. The semester began with introductory lectures on geoscience, ecology and policy before moving on to specific case studies, including examples from developing countries. Students examined the science and politics behind a number of laws and treaties, including the 1970 U.S. Clean Air Act and the Kyoto Protocol, an international treaty geared toward reducing greenhouse-gas emissions.

“Our goal was to have students critically evaluate and discuss these issues, and gain an understanding of not only environmental policy, but also the scientific underpinning of environmental issues as well as the ways in which science and policy influence one another,” Oppenheimer and Wilcove said.

Climate change is undoubtedly going to affect the way humans live, and changes to the world’s natural resources, food supplies and biodiversity are already becoming visible. Yet, so many of today’s policy decisions must be geared toward an unknown future, making it a difficult problem to tackle.

“Climate change is a policymaker’s nightmare,” Oppenheimer said during a class on climate change science. “It’s irreversible, it’s everywhere, and the consequences have serious time lags. Most of the damage is always in the future, several decades down the line. These problems together? It’s a nasty one to try to solve.” 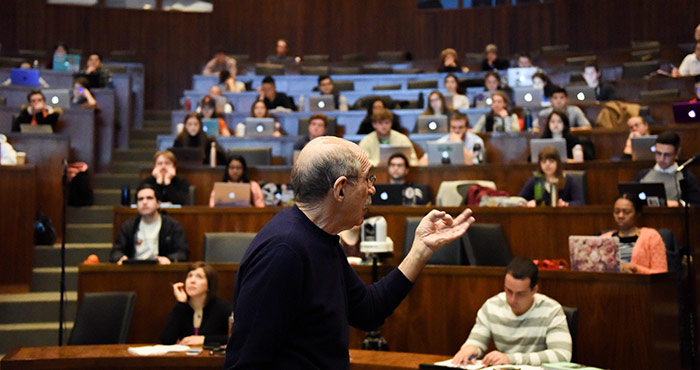 During his lecture, Oppenheimer used metaphors to explain the effects of greenhouse gases and carbon dioxide emissions (CO2). He likened greenhouse-gas emissions in the atmosphere to a car interior on a cold but sunny day with the windows closed. “You can imagine the heat that gets trapped inside,” he said. “It becomes our little greenhouse on Earth. So what then happens to this build-up of CO2?”

Like filling a bathtub with a clogged drain, the amount of CO2 is accumulating faster than it can dissipate, Oppenheimer explained. Each year, an average of eight gigatons of carbon dioxide is added to the atmosphere. Much of the CO2 goes into the ocean, while some is absorbed by soil, land and plants. But about half remains in the atmosphere. “Each year, this imbalance accumulates,” Oppenheimer said with a pause. “Drip, drip, drip.”

This is one of the many climate change issues Oppenheimer presented to the class. Throughout the semester, he and Wilcove introduced the basic science before moving through a number of domestic policies and international environmental treaties — those that have been successful and those that have failed.

“It’s easy to think about environmental issues and climate change, and point out failures or pitfalls of certain plans, but it’s less common and just as constructive to analyze policy changes that were, for the most part, successful,” said Daniel Qian, a junior majoring in sociology. “When talking about environmental issues, a lot of people tend to take the doomsday approach, but Professor Oppenheimer’s lecture on the U.S. Clean Air Act, for example, had the takeaway that policy can work when it is carefully researched, constructed and implemented, and when problems are solved from multiple angles.”

“For me, it was eye-opening to see the wide range of success levels, from the highly successful Montreal Protocol, which quickly phased out chemicals that had led to the ozone hole, to the largely ineffective Kyoto Protocol,” said William Atkinson, a junior studying geosciences. “I learned that policies are not created equal, and even small details like enforcement clauses and domestic interest groups can make a big difference. Identifying what works will hopefully help shape future agreements.”

Kira Keating, a junior studying economics, said she particularly found value in the take-home assignments geared toward policy solutions. She especially enjoyed working on a case study assigned by Wilcove that focused on the bison of Yellowstone Park. Students were presented with an issue related to conflicts between bison and cattle and had to present policy solutions for a number of constituencies.

“The assignments are really extrapolations of what we’ve been learning," Keating said. "We come up with policy solutions, and Professors Oppenheimer and Wilcove explain how it plays out in the policy world. I have especially enjoyed diving into these real-world examples."

In some cases, Oppenheimer and Wilcove have been personally involved in these real-world scenarios, and their complementary expertise made them a perfect pair to teach a course on environmental science and policy.

“They are two of the most engaging professors I’ve ever had,” Qian said. “They encourage students to think from different perspectives, sometimes ones that are unconventional or that you might not necessarily agree with.”

“Their work is a smart balancing act,” Negron-Reichard said. "They play off each other and enhance each other’s own lectures by bringing in insights from the other. Sometimes it’s even quite funny; it’s clear they are friends. I think having two experts who contribute to the discussion from different points of view greatly adds to the discussion, and I see it as one of the best parts of the course.”

A Turn Toward the Tropics

In an April 7 class focused on the future of tropical forests, Wilcove took the lead while Oppenheimer sat with the students. On the screen above him, Wilcove projected two images. 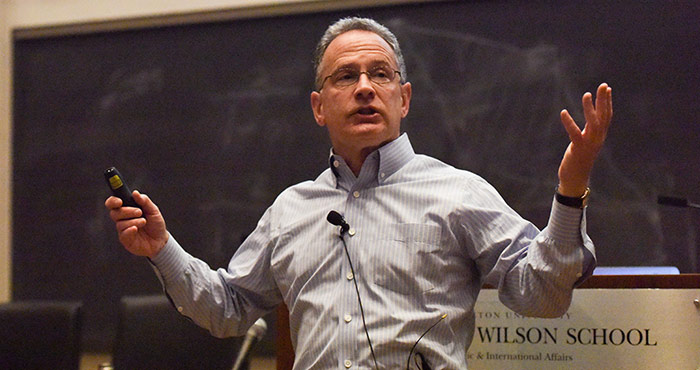 The first was a photograph of a typical North American forest. In the image, the trees stood tall, almost in uniform, providing a reasonably thick canopy over the ground below. For the most part, the trees looked similar.

The second image, which exploded with lush greenery and foliage, was of the Amazonian Basin located in central-eastern Brazil. It seemed impossible to count how many different trees met the eye, a portrait of thick, vibrant blooms.

“The tropics present a paradox: rich forests on poor soils,” Wilcove explained. “This means the consequences of deforestation are much more apparent and greater. Being able to understand these consequences is essential for policy, and that’s why we now turn to the tropics as an area of study.”

Wilcove titled part of his slideshow, “A Bee, a Tree, What’s in It for Me?” and, for the next half of class, walked students through a number of ecological concerns and quandaries.

He began with a historical overview of worldwide deforestation and its influence on the environment. In the 1980s “slash-and-burn agriculture” — the cutting and burning of tropical forests — was popular. Next came the expansion of big agriculture in the 1990s, driven by private capital with government funding and large-scale corporations fueled by globalization.

“All of this resulted in land conversion, which might’ve been helpful to the economy but harmful to biodiversity,” Wilcove said.

In the case of clear-cutting, large swaths of forests are cut down altogether, which has significant impacts to biodiversity, Wilcove said. Selective logging only removes certain trees, which causes fewer losses of biodiversity but also produces less timber to sell. Among the most traumatic land conversion types is replacing a forest with a plantation, which may generate profits but significantly hurts the region’s flora and fauna.

Wilcove concluded his lecture with a review of the world’s “ecosystem services.” This term, made popular in the early 2000s, describes the various goods and services, such as clear air or clean water, that are produced by nature.

As he rattled off the list, Wilcove showed images of different land types and resources. Throughout his lectures, Wilcove often paused, posed an important question to the class and asked students to work with his or her neighbor to come up with the solution. This approach pushed students to learn how to not only articulate policy, but to understand the science side, too.

This articulation is one of the primary reasons that Atkinson enrolled in the course. Atkinson’s research focuses on the geochemistry of soil, where much of the world’s terrestrial carbon is stored. Through the course, he wanted to improve his science communication, something he said seems to come naturally to Oppenheimer and Wilcove.

“As a science major in a class dominated by policy students, I’ve learned how to tailor explanations to the audience at hand,” Atkinson said. “Scientists today often struggle to communicate their results to the outside world.”

Atkinson said the policy class has given him a chance to practice connecting with those outside his field. “Making these interdisciplinary connections will be crucial for scientists in terms of maintaining public credibility and importance in todays’ opinion-centered world,” he said.

Few understand this better than those working directly in the field. Oppenheimer and Wilcove invited a number of speakers to the class including May Boeve, climate activist and a founder and executive director of 350.org; Nat Williams, former head of government relations for The Nature Conservancy; and Princeton alumnus Ramon Cruz, a senior policy analyst who works on environmental justice at a transportation nongovernmental organization. 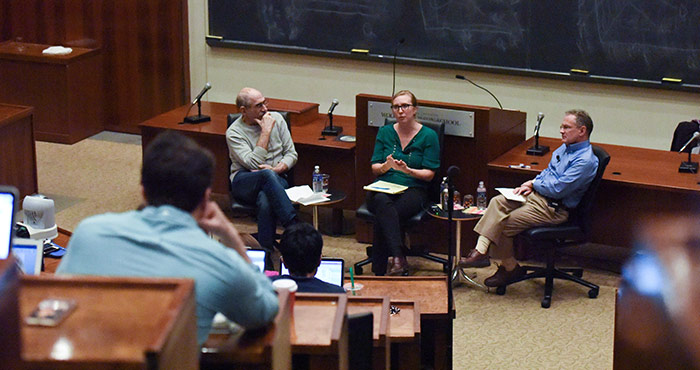 Boeve, whose organization is leading an international movement to decrease CO2 concentrations, was brought to campus thanks to the Woodrow Wilson School’s Leadership in through Mentorship Program. This series brings high-level leaders to Princeton for two to three days to meet with students, sit in on classes and present public lectures.

“Outside speakers give us personal accounts of how they became involved with environmental policy at the grassroots level,” said Shobhit Kumar, a junior majoring in the Woodrow Wilson School. “May Boeve, who began environmental activism when she was a college student, was especially inspiring. She began her work when she was barely 20 years old, and today it has a worldwide impact.”

This kind of commitment resonates with many students in the class. For Samuel Rob, a junior majoring in the Woodrow Wilson School, it’s why he admires Wilcove, who is both his academic adviser and thesis adviser.

“I see in him what I hope to one day achieve: being an indefatigable advocate for the environment," Rob said. "While Professor Wilcove has experienced many difficulties in a lifetime of advocating for the environment, he remains buoyantly optimistic when many others would simply find another calling."

Throughout the semester, Oppenheimer and Wilcove remained positive, despite the gravity of issues and immense challenges surrounding them, Rob said. “They have what I believe every good advocate should have,” he said. “Optimism.”