Climate-driven migration is having global impacts, something Hélène Benveniste Ph.D. ’21 is acutely aware of thanks to her research. There are an increasing number of people who need to move and don’t have the resources to do so. Helping these hidden communities should be top of mind for policymakers.

In this episode of #Changemakers, she discusses her research on climate change policy, as well as the challenges she faces as a woman in academia. She also shares advice for anyone considering a Ph.D. at SPIA.

Benveniste is a postdoctoral environmental fellow at the Harvard University Center for the Environment at the Harvard Kennedy School. She graduated from SPIA in 2021 with her Ph.D. in Public Affairs, focusing on Science, Technology, & Environmental Policy (STEP). Previously, she was a researcher at University of California, Berkeley and the National Center for Atmospheric Research. She also served as a research scientist and project manager for the French negotiation team during the creation of the Paris Climate Agreement.

#Changemakers is a podcast series featuring the many Princeton SPIA alumni who built up their policy toolkits at Princeton and went on to change their communities. The show is produced, hosted, and edited by B. Rose Huber, director of communications and senior writer at SPIA.

Q: What is the most pressing issue facing us today?

Benveniste: For me, it’s climate change, which is something I've been working on for the entirety of my career. Climate change is such an important and pressing issue because it affects every other issue. For policymakers, it's important to always have in mind that whatever issue people work on, they're going to have to look at it through the lens of climate change one way or another because we expect it to affect every other policy area.

Q: What do you study?

Benveniste: My work is focused on climate change policy, and I've been looking at it from a transboundary international perspective. I'm looking at it through the lens of equity and as it relates to the effects of climate change on human migration ­–– who is allowed to move, who isn't, who is able to afford it, how people are treated when they do and when they don't, etc. The other angle is this question of efficacy in implementing climate change policies and what we can do at the international level to make things more efficient.

Q: Do you think it's possible to have a coordinated response to climate change internationally?

Benveniste: It's a yes and no question. No, because I was born in 1989 and since then, there hasn't been much progress on the international climate problem. It's taking a long time. On the other hand, I do see a lot of progress that has been made in recent years. Unfortunately, that’s because climate change has become more visible. It has become more present to people’s minds when they look at wildfires, when they look at back-to-back hurricanes and floods. A few years ago, people were seeing it as a more abstract matter.

Q. What did you think of COP26, which took place in November 2021? What was the goal and outcome?

Benveniste: COP is an acronym for conferences of parties, and the parties are close to 200 countries who are part of the United Nations Framework Convention on Climate Change, which has been meeting every year since 1992. Last year, the 26th meeting took place in Glasgow, Scotland. The current climate regime is now governed by the Paris Agreement, which is the last agreement that was signed in 2015. The discussions are taking place in terms of how to implement this agreement, which was a framework and a lot of it still needed to be negotiated. In Glasgow, there were positive outcomes about what was decided in terms of technical aspects, such as how you can ensure that countries are transparent in what they say they do and how to report it, which is important. Each time a COP happens, there's work to be done.

Q: Can you tell us more about climate migration and what you’re studying?

Benveniste: One of the angles I've been studying — and that is not talked about enough from a policymaking perspective — is that people have in mind this vision that damage is going to induce this huge surge of migrants across borders or within countries. Within countries, it's true that we expect to see a bit more internal migration. But migration is costly. Because climate change already has and is expected to decrease resources in some of the most deprived communities already, we expect also to see an increasing number of people who would like to move but cannot afford to do so. There's a need for policies to help those communities who tend to be less visible just because they're not on the move. At the international level, it's true that all the frameworks that have been put in place in recent years exclusively focused on those who move but not on those who don't. There's a gap in terms of what needs to be done.

Benveniste: It depends on the needs of the community. That's where the bottom-up approach becomes important. It can look like financial transfers so that people can adapt wherever they are. Or having enough funds to switch crops, having funds to construct an infrastructure setting that helps protect from whatever impacts they're facing. Migration is often a source of diversification of income and sending back remittances is costly. One of the policies that could help could be to lower those costs. It’s important to make sure that the needs of the communities are answered.

Q: Climate change is affecting people’s ability to move to work in another place and come back home. What's the solution for people like that?

Benveniste: The way people end up deciding to move or not and to come back or not, it's always a mix of what happens on the environmental front if they are directly exposed to that. But it's also a mix of what happens from an economic perspective –– where they came from and where they go. What does the work situation look like? It also depends on the policies that are put in place. If you talk to Professor Doug Massey at Princeton, one of his topics of research looks at migration from Mexico to the U.S., and one of the trends that we have seen in past years is that return migration has decreased because it's become much more difficult to go to the U.S. So, the people who go don't come back, whereas before there was a back and forth, and now you see much more permanent migration rather than cycling migration, because the board of policies have changed so much.

Q: What is it like to move between those spaces of academia and policy? Are there particular challenges to making the shift between the two?

Benveniste: Yes and no. I worked for a few years before starting my Ph.D. in policy positions. It was helpful for me to do policy-oriented research and practical experience. It was invaluable for me. That's the case for a lot of Ph.D. students at SPIA. The link between academia and policy varies a lot from one country to the next. One of the things that I enjoy in the U.S. is that it feels easier to have links between those two communities than it did back in France, which is where I'm from.

Q: What it was like to work with leading climate scientist Michael Oppenheimer?

Benveniste: I'm biased, but I'm a big fan of Michael. His perspective is invaluable to students because he has such a big picture mindset, and he's able to bring perspective on any question that you're trying to ask and make sure that you are making a policy relevant, that it's something that you should spend time working on.

A few of the SPIA professors in the STEP program have spent about half of their career outside of academia. Michael, for instance, was at an environmental NGO for half his career. It gives them a practical perspective and that makes it helpful to bridge the gap between academia and policy.

Q: What was your Princeton experience like as a Ph.D. student? What would you tell others who are thinking about the program?

Benveniste: I had a blast. I was not aware that I would get to spend so much time with the MPAs and the MPPs. That was a huge source of learning for me. The amount of policy experience in the room when we were taking classes and when we were listening to speakers was astonishing to me. I learned a lot from listening to my classmates. I knew I would get to work with some of the best scientists on this topic because it's Princeton. I wasn't disappointed in that at all. It was great, but the more practical exposure to the policy world through the other students was something that I had not anticipated. I'm grateful for that.

Q: Did any challenges come up for you during your Ph.D.?

Benveniste: It is challenging, and it can be a bit lonely sometimes. You are the one who has to come up with your own questions you want to answer, and then you have to work on them. The loneliness of the work itself, even if I was surrounded by friends all the time, made it quite challenging. Because of the nature of the research process, it takes a very long time before you figure out whether what you do is any good. Until my fourth or fifth year, I had no idea whether what I was producing was good or not. That was challenging because I was used to a professional environment where you get feedback quickly. The mental health challenges that come from the pace and structure of work can be difficult.

Q: What has been your experience as a woman in academia in the U.S. versus France?

Benveniste: One of the reasons I wanted to get a Ph.D. was because I felt I wasn't being taken seriously. I'm a woman. I'm short. I have a high-pitched voice. I look younger than my age. It was very difficult in my professional environment in Europe to feel that I was being taken seriously and not being asked to get coffee regularly. Part of why I wanted to get the Ph.D. was to gain some credibility. That degree is more visible than the rest. It wasn't the only reason. Don't go into a five-year enterprise just for that reason.

Being a woman in academia was much harder for me in France than it was in the U.S. The way the Ph.D. program is set up at SPIA helps with this. You have one advisor, but you are encouraged to work with a range of different professors.

Q: What advice would you give to our prospective students? 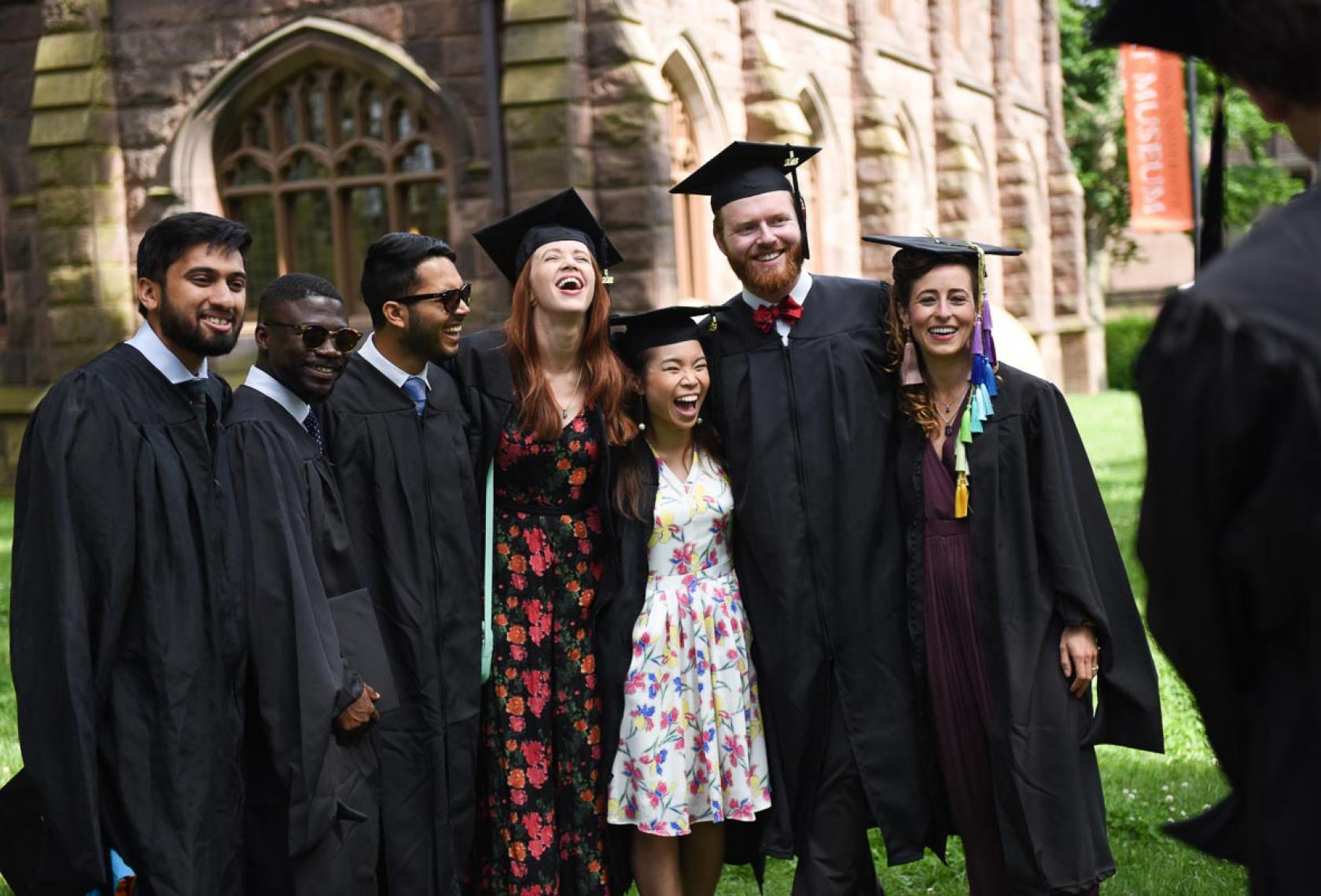 We are committed to ensuring that our community feels respected, supported, and valued both inside and outside the classroom. We aim to prepare our students to promote equity and foster inclusion during and after their time at Princeton.
Read More