Class Snapshot: 'Ebola in 2014: The Science, Society and Politics of a Modern Epidemic'

Apr 28 2015
By B. Rose Huber
Topics Health
Source Woodrow Wilson School
Share
Class: "Ebola in 2014: The Science, Society and Politics of a Modern Epidemic"
Description: This course, offered primarily to juniors and seniors, focused on the current Ebola epidemic in West Africa. Throughout the semester, students examined the public health science of Ebola, the social aspects of the epidemic and the national and international politics related to the response. "The Ebola crisis is a significant public concern. It was important to have this discussion at Princeton, especially while the attention is so focused on the epidemic," said Keith Wailoo, vice dean of Princeton University's Woodrow Wilson School of Public and International Affairs, who helped to develop the course.
Instructors: The course was taught by public health professionals from the International Rescue Committee who have worked in West Africa. The course was led by Emmanuel d'Harcourt, senior health director, International Rescue Committee (IRC), who provides on-the-ground technical assistance for IRC's environmental health and health care programs in Africa, Asia, the Middle East and Asia. d'Harcourt also is a panelist at the Princeton-Fung Global Forum on Modern Plagues. Additional course instructors from IRC include Lara Ho, senior technical advisor; Ruwan Ratnayake, epidemiologist and technical advisor; and Anne Langston, senior health data coordinator. Kimberly Bonner ’08, MPA’12, a research associate with Médecins Sans Frontières (Doctors without Borders), served as a teaching assistant. 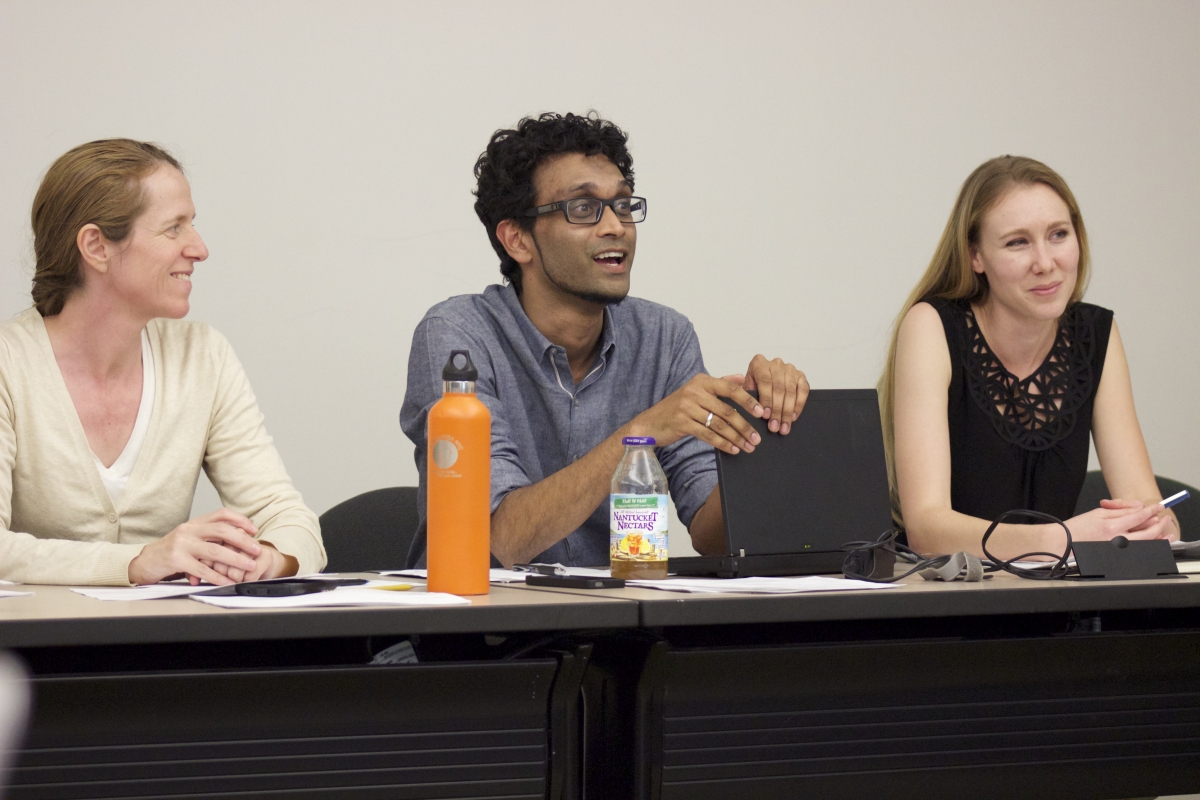 Wailoo and d'Harcourt have known each other since their undergraduate days at Yale University, where Wailoo was d'Harcourt's freshman counselor. Through their shared interest in public health, they've remained longtime colleagues. They both attended the "Health Across Borders" conference at the University of Maryland in fall 2014, where they discussed the potential for a course on Ebola at Princeton. "Emmanuel is so deeply informed and engaged, working on the front lines of the Ebola crisis," Wailoo said. "He has a complicated understanding of interventions and a broad awareness regarding health policy. I knew this was a perspective our students in global health needed to hear."
Science, Society and Politics: The semester-long course was broken down into three themes: science, society and politics. Students began by examining the history of Ebola – thanks to a presentation by Wailoo – before diving into the characteristics of the disease, modes of transmission, disease prevention and control. Next, they looked at the social implications of the outbreak: the social conventions and stigma behind the disease as well as the cultural understanding of Ebola interventions. They also studied the politics behind the crisis: how the health system operates, how health governance plays a role and what human resources are available. In one of the final classes, they looked at Ebola in the United States, asking: What has the current epidemic revealed about our preparedness (or lack thereof)? 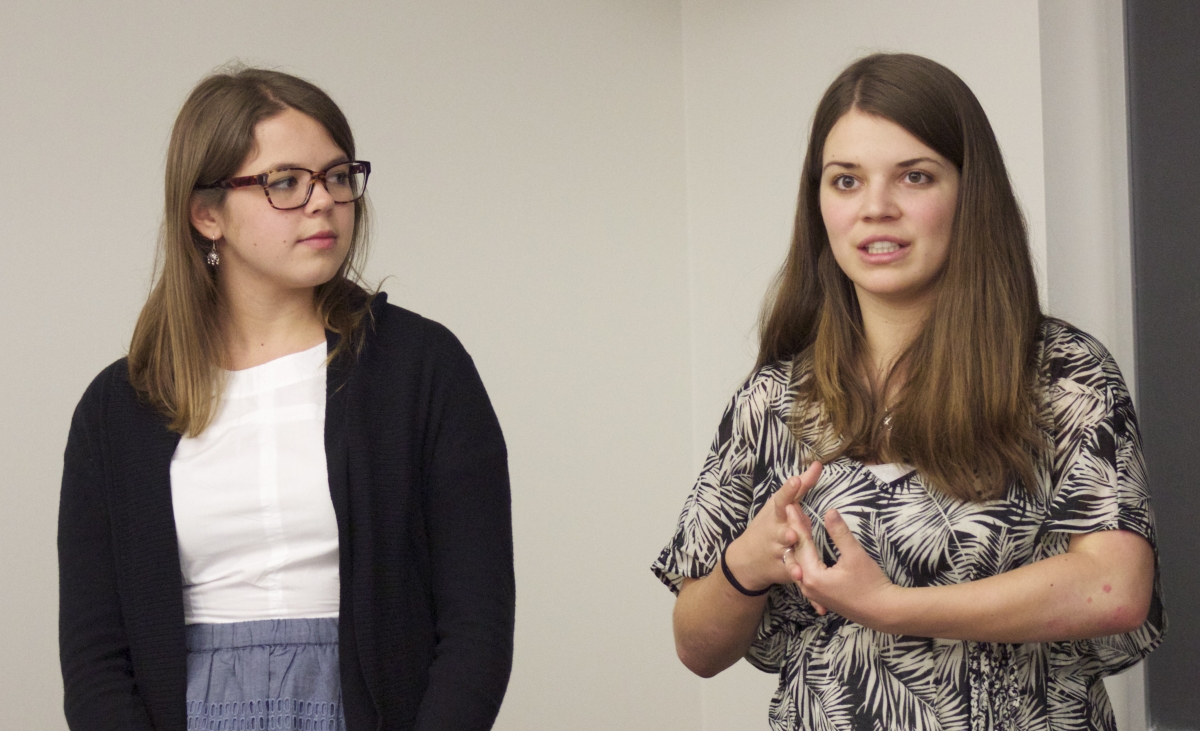 At the End of the Semester: For their final project, students drew upon what they had learned throughout the semester and applied those concepts to another epidemic. One group presented the science, social implications and politics behind the malaria outbreaks in Vietnam from 1991 to 1992. They explained how these outbreaks caused a significant economic crisis for the country even though malaria was already endemic. When comparing the disease to Ebola, they summarized that the panic was not as widespread since people had a better understanding and awareness of malaria. Still, a lot must be done structurally and socially to reach Vietnam's elimination goals by 2030, they said.
Another group investigated tuberculosis (TB) in Peru, where an epidemic of drug-resistant TB emerged in 1995. They found that nearly half of all cases of tuberculosis were found in the country's capital. In one neighborhood, residents were hit hard when multi-drug resistant TB emerged, and their treatment drugs failed. Drawing comparisons to the Ebola crisis, they showed how both epidemics occurred in post-war areas and regions with damaged health care systems.
Across all presentations, students found linkages between past plagues and Ebola, bringing forth social, political and scientific implications for future epidemics.
Students Say: Jamie Shenk, a junior majoring in history, was excited when she received an email from the Program in Global Health and Health Policy (GHP) announcing this course offering. "I'd been working for a health-related nonprofit over the summer – the Fundación Salud por Derecho/Right to Health Foundation in Madrid – when the press coverage of the epidemic reached a high point," Shenk said. "I've been following the epidemic since, so I was excited about the opportunity to learn from professionals who had been on the ground responding."
Shenk found the course especially valuable thanks to the real-world application. "At many points throughout the semester, I've been pushed to apply the concepts and tools I learned in my core courses in the GHP program to real-world case studies. Seeing that public health professionals use the same tools when approaching the epidemic has been a validating experience."