With the global population rising, analysts and policymakers have targeted Africa's vast wet savannas as a place to produce staple foods and bioenergy groups at low environmental costs. But a new report published in the journal Nature Climate Change finds that converting Africa's wet savannas into farmland would come at a high environmental cost and, in some cases, fail to meet existing standards for renewable fuels.

Led by researchers from Princeton University's Woodrow Wilson School of Public and International Affairs and Department of Ecology and Evolutionary Biology, the study finds that only a small percentage of Africa's wet savannas (2-11 percent) have the potential to produce staple crops while emitting significantly less carbon dioxide than the world’s average cropland. In addition, taking land conversion into account, less than 1 percent of these lands would produce biofuels that meet European standards for greenhouse-gas reductions.

"Many papers and policymakers have simply assumed that Africa's wetter savannas are expendable from an environmental standpoint because they aren’t forests,” said co-lead author Tim Searchinger, a research scholar at Princeton's Program in Science, Technology and Environmental Policy (STEP), which is based at the Woodrow Wilson School. "Governments have used this assumption to justify large leases of such lands to produce food for the outside world and large global targets for bioenergy. But when you actually analyze the realistic potential to produce food or bioenergy relative to the losses of carbon and animal biodiversity, the lands turn out not to be low cost."

Even if these lands are converted for agricultural use, the only way Africa could become an exporter of crops is by depriving its own people of food, the researchers report. Farming a large expansion of Africa's savannas — nearly half of the world's remaining savannas — would also have negative impacts on the rich and diverse population of tropical birds and mammals. 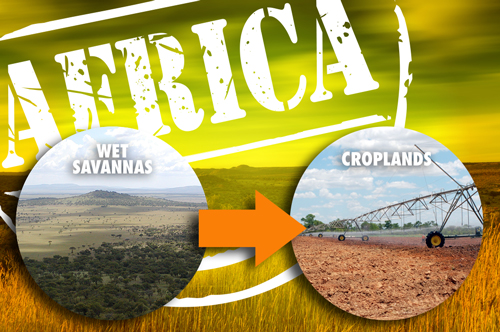 The results highlight the need for policies that influence where and to what extent cropland expansion occurs. Likewise, any new cropland that is created for growing staple foods should be prioritized to meet Africa's growing food demands, the researchers report.

"Our paper does not merely analyze the climate costs of different lands, but does so relative to their potential food benefits," said co-lead author Lyndon Estes, associate research scholar at STEP. "Because of Africa's rapidly increasing needs for more food, and the high environmental costs of agriculture, it is important to perform this analysis on a more detailed level in each country to determine which lands would produce the most crops for the least environmental cost."

Using a map from the World Bank, the researchers examined the "Guinea Savanna," a region in Africa that includes a wide range of savannas, shrublands and woodlands. Given the area's relatively high rainfall, the region has good potential for growing crops, especially maize and soybeans, which the World Bank cites as the optimal staple crops to grow in sub-Saharan Africa.

The researchers examined the potential environmental impacts versus the benefits of growing maize and soybeans. Using a variety of existing global datasets and simulation methods, they found that, on average, current global maize croplands emitted 20 tons of carbon for each ton of crop grown annually. For soybeans, it's 44 tons for each ton grown. This means that only 2 percent of lands in the Guinea Savanna could be considered high-benefit/low-carbon-cost maize farmland, while between 9.5 and 11 percent would qualify for soybeans.

According to past studies, the Guinea Savanna could also serve as a large potential source of land for low-carbon biofuels. But those studies don't take into account the costs of carbon released by land conversion, what the researchers call "carbon payback time." This is the number of years it takes for greenhouse gas savings to justify the initial cost of releasing carbon through land conversion.

Factoring in this land-use change, the researchers find that it would take more than 50 years to recover from converting half of the Guinea Savanna's wet savannas into cropland. This doesn't meet the European Union 2017 standard – that biofuels must produce 50 percent less greenhouse gas than gasoline over 20 years. They also find that less than 1 percent of the land would be recovered in less than 10 years.

Even if Africa's wet savannas could provide some staple crops at low environmental costs, sub-Saharan Africa can only become an exporter of crops by stripping its own people of food. Africa's population is expected to double by 2050 and so, for sub-Saharan Africa to become self-sufficient in food production, the amount of crop calories would need to grow 4.7 times the 2007 levels, the researchers report. This means that Africa would need to expand its cropland by 345 million acres (140 million hectares), releasing 33 billion tons of carbon dioxide. This is the same amount released globally in 2013.

"Because of Africa’s rapidly increasing needs for more food, and the high environmental costs of agriculture, it is important to perform this analysis on a more detailed level in each country to determine which lands would produce the most crops for the least environmental cost," Estes said.

In terms of biodiversity, agricultural conversion nearly always has large impacts. In the Guinea Savanna, there is a high diversity of animals that are distinct compared to other continents. In addition to this richness, the Guinea Savanna supports some of the last large mammal migrations and provides key habitat and freshwater flows to critical biodiversity areas such as the Okavango Delta, which is located outside of the region. Because many of the factors related to the biodiversity costs of agricultural conversion are unknown, researchers did not make a calculation.

"What we show is that for a few key taxa – birds and mammals in particular – the Guinea Savanna is almost as biodiverse as the world's wet tropical forests, and has a species richness as great as all of Africa's protected areas outside the Guinea Savanna," said Dan Rubenstein, a professor in the Department of Ecology and Evolutionary Biology and director of the Program in African Studies. "Transforming this habitat into cultivated landscapes not only will release high levels of previously stored carbon, it will also engender high costs in terms of lost species, some of which are seriously endangered and unique to the Guinea Savanna."

One finding of the paper is that the world needs to work hard to hold down crop expansion in general, and that Africa is not a good source of staple crops or biofuels for the rest of the world. But in Africa, the researchers point out that some expansion is inevitable, so creating policies that influence where cropland expansion occurs is important. Undertaking more finely-tuned analyses – with even more precise data than what these researchers used here – can help to better target specific regions ripe for less environmentally costly conversion.

"One basic lesson is that Africa’s wet savannas deserve more environmental respect than they get," said Phil Thornton, a co-author and senior researcher with the CGIAR Research Program on Climate Change, Agriculture and Food Security.

In addition to Searchinger, Estes, Rubenstein and Thornton, the paper's coauthors include Rachel Licker, a postdoctoral researcher at Princeton; Tim Beringer from the Potsdam Institute for Climate Impact Research; An Notenbaert from the International Center for Tropical Agriculture; Ralph Heimlich from Agricultural Conservation Economics; and Mario Herrero from the Commonwealth Scientific and Industrial Research Organisation.

The paper, "High Carbon and Biodiversity Costs from Converting Africa's Wet Savannas to Cropland," was published online March 16 in Nature Climate Change. The research was supported by funding from the David and Lucile Packard Foundation; the Norwegian Agency for Development Cooperation; the Gordon and Betty Moore Foundation; the CGIAR Research Program on Climate Change, Agriculture and Food Security from the CIGAR Fund; and the European Union Seventh Framework Programme.