Burton is the ambassador and former head of the Organization for Security and Co-operation in Europe (OSCE) Mission to Bosnia and Herzegovina. Over his career, he compiled extensive experience in the Balkans, especially in Bosnia-Herzegovina and Kosovo.

He served as deputy chief of mission at the U.S. Embassy in Sarajevo, and as deputy international civilian representative at the International Civilian Office. He was also deputy principal officer at the U.S. Office in Pristina and, later, head of the U.S. Provincial Reconstruction Team in Kirkuk, Iraq.

In this Q&A, Burton offers his view on recent events in Afghanistan and how future generations may be affected. He also reflects on how leaders carry a certain responsibility, whether heavy or light, and that duty of care should always be top of mind.

Q. What is/are the most important policy issue(s) facing us today?

Burton: As one of the many SPIA grads who dealt with Afghanistan — I was head of the Provincial Reconstruction Team (PRT) in Panjshir Valley for two years — I, too, am distressed by the swing of events in that country. The end of the 20-year engagement will let loose a riptide of consequences. The “graveyard of empires” has become, one might say cynically, the empire of graveyards. Right now, it’s a humanitarian crisis. The Afghan population is close to 40 million, similar to the size of California. The country needs our help.

Longer term, I would point to the disrepair of our alliances and partnerships around the world. We need to tend to them, in the sense of George Shultz ’42, former secretary of state, and his notion of diplomacy as a constant effort to mind the garden. Our global network is one of the pillars of our influence: envied, unrivaled. We’ve all heard the terms “hard power” and “soft power.” Our network gives us staying power.

And, in a related way, we need to think through our self-conception as a great power. What is our self-image? Do we see ourselves as a city on a hill, apart and exalted? Here’s a different image, one from journalist Walter Lippmann during World War II, that of the Atlantic Ocean as an “inland sea,” a concept that suggests a community of values and interests. Policy issues are often conveyed in images of self-conception.

Q. In your work, what current project or initiative are you most excited about?

Burton: I’m excited about supporting the International Student House on Dupont Circle in Washington, D.C., where I spent three high-spirited years right after college. I’m about to become a board member of the House. It is celebrating its 75th anniversary as one of the premier residential experiences for students and scholars, both American and foreign. It is one of the great world-causes and of the world’s great causes.

Q. Over the course of your career, what are the most important skills/strategies you’ve learned?

Burton: I think it’s important to separate out the generational imprints and not picture society as homogenous. I say this thinking back to my time in Eastern Germany, the former German Democratic Republic, right after unification. I was the consul general in Leipzig and dealt with viewing society through a generational lens. That part of Germany experienced many wrenching transformations, some five regime changes in the last century. That will also be true now of Afghanistan, whose population is one of the youngest in the world. Think of all those children and teenagers who never lived under the Taliban.

Another lesson I’ll share dealt with the importance of psychology in public affairs in terms of voting behavior, but also regarding fighting morale, as we saw dramatically this summer in Afghanistan. There’s a fine passage in the book “War and Peace,” in which a Russian count contrasts the different motivations of soldiers in the Napoleonic wars. (The French, he says, respond to “high-sounding phrases.”) The role of psychology may be hard to teach at a policy school, but it’s critical in politics and diplomacy — and war.

A third lesson: I found it useful to use intellectual touchstones throughout a career, that is, the same source of consistent takes on current events. I always read The Economist to see how it applied its liberal philosophy to the changing world. And I always read Henry Kissinger’s essays to see how he applied his concept of statesmanship. The point is not to agree with these touchstones (and I rarely did with Kissinger on our Balkans policy) but to appreciate their exercise of analysis.

Q. When it comes to decision-making, what are the most effective strategies? How do you make critical decisions and forge a consensus?

Burton: Decision-making is art and science — that is, creativity within structure. Let me explain a method I adopted halfway through my career, upon assuming leadership roles. To start off, gather the key colleagues on the issue at hand for a freewheeling discussion. After a thorough airing, it’s important for the leader to “sum up” the preceding points, highlight the decisive ones, and announce how the group came out. Next, the note taker should record the assignments for execution of the decision. Decisions without assigned follow-up evaporate like the morning mist.

Q. In what ways did the Princeton School of Public and International Affairs prepare you for your career?

Burton: The School taught me in marvelous concentric circles. The MPA core was the first-year curriculum; then, moving outward, came the second-year electives (diplomatic history in my case, taught by John Gaddis). Next, we engaged with guest speakers through the broader University community, and finally, the outer circle, we embarked upon internships. For example, my two New York internships — at Foreign Affairs and the Trilateral Commission — introduced different vantage points on foreign policy beyond the official precincts of the State Department. And my summer internship at the U.S. Mission in Berlin, then a divided city at the Cold War epicenter, made a perfect pathway to the U.S. Foreign Service, which I joined the week after graduation. The SPIA circles were different learning environments, different in style but rich in effect. My career drew on all of them, those circles inside and outside the classroom. 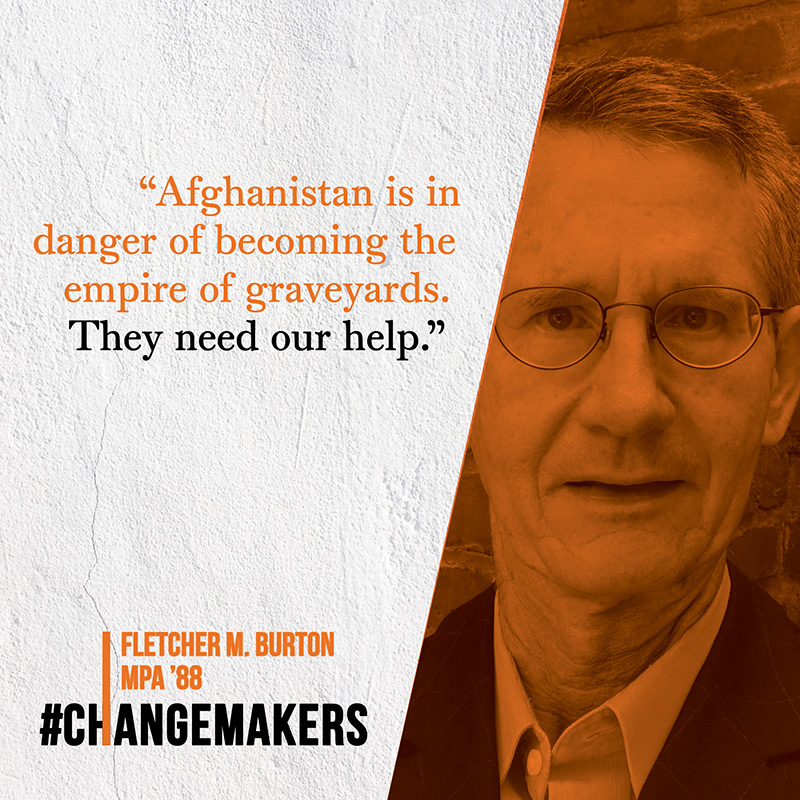 Q. How do you think the School trains students to be leaders? What were the tactical skills you gained while at the School that you still employ today?

Burton: Leaders “carry” responsibility. The image speaks to my experience. Whether burdensome or light, responsibility is that extra weight, that duty of care, peculiar to the leader.  The School trains students in various ways: responsibility for completing the classroom assignments, doing the internships, choosing the professional career — and, all the while, meeting the high standards of Princeton and its ideal of service. Also, for me, history was a good way to study leadership, especially Fred Greenstein’s course on the American presidency.

In terms of tactical skills, the School was a virtuoso taskmaster, always drilling the importance of written assignments done on time. No matter what the career, this is an essential skill: to write with ease and effect. Style counts as well. The corollary is that styles change. When I joined the State Department in 1988, George Kennan’s “Long Telegram,” which was a lengthy memorandum and the 1946 debut of the Containment Doctrine, was the standard model. Every junior officer aspired to his elegant, discursive prose. Within 10 years, after the advent of email, the Long Telegram was seen as, well, too damn long. By the late 1990s, a Kennan-like cable sent to Washington would have been viewed by harried policymakers as a grave impertinence.

Q. How can young people entering the workforce be successful? What advice would you give to our prospective students?

Burton: The cliché of commencement speeches — carpe diem! — always left me cold. It might lead to an enjoyable afternoon picnic, but not to a rewarding long-term career. Young people should try something more useful, albeit harder: Make a strategic bet. In other words, identify a big idea or megatrend of personal interest, one that could sustain a career. No matter what the field, be it technology, economics, or politics, just connect. Here’s the nub of the matter: You can always change your bet, but bet you must. In my career, I attached myself to three big causes: overcoming a divided Europe and Germany; then rebuilding the separate states of a shattered Yugoslavia; and finally, running PRT’s in war-torn Afghanistan and Iraq.

I wrote earlier of a nation’s self-image and its importance to itself and other nations. That is also true for an individual and for a SPIA student. The School is a wonderful opportunity to carve out that self-image. For example, in the State Department, there are headquarters types and field hands. Those are different types, and I belonged to the latter, but the difference is not between policymakers and takers. Policy comes down to the field, in both senses. Think of that chaotic scene at Kabul airport where policy was in the hands of those Americans making fateful choices to admit or turn away. Maybe no policy school could have prepared them for the anguish of that experience.