Recordings of the sounds in tropical forests could unlock secrets about biodiversity and aid conservation efforts around the world, according to a perspective paper published in Science.

Compared to on-the-ground fieldwork, bioacoustics —recording entire soundscapes, including animal and human activity — is relatively inexpensive and produces powerful conservation insights. The result is troves of ecological data in a short amount of time.

Because these enormous datasets require robust computational power, the researchers argue that a global organization should be created to host an acoustic platform that produces on-the-fly analysis. Not only could the data be used for academic research, but it could also monitor conservation policies and strategies employed by companies around the world.

“Nongovernmental organizations and the conservation community need to be able to truly evaluate the effectiveness of conservation interventions. It’s in the interest of certification bodies to harness the developments in bioacoustics for better enforcement and effective measurements,” said Zuzana Burivalova, a postdoctoral research fellow in Professor David Wilcove’s lab at Princeton University’s Woodrow Wilson School of Public and International Affairs. 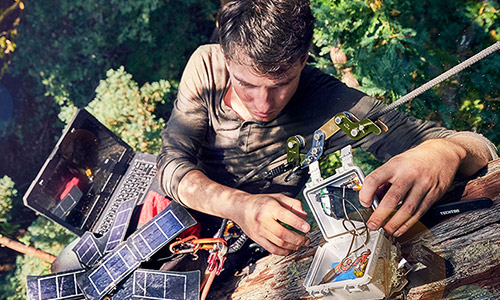 “Beyond measuring the effectiveness of conservation projects and monitoring compliance with forest protection commitments, networked bioacoustic monitoring systems could also generate a wealth of data for the scientific community,” said co-author Rhett Butler of the environmental news outlet Mongabay.

Burivalova and Butler co-authored the paper with Edward Game, who is based at the Nature Conservancy and the University of Queensland.

The researchers explain that while satellite imagery can be used to measure deforestation, it often fails to detect other subtle ecological degradations like overhunting, fires, or invasion by exotic species. Another common measure of biodiversity is field surveys, but those are often expensive, time consuming and cover limited ground.

Depending on the vegetation of the area and the animals living there, bioacoustics can record animal sounds and songs from several hundred meters away. Devices can be programmed to record at specific times or continuously if there is solar power or a cellular network signal. They can also record a range of taxonomic groups including birds, mammals, insects, and amphibians. To date, several multiyear recordings have already been completed.

Bioacoustics can help effectively enforce policy efforts as well. Many companies are engaged in zero-deforestation efforts, which means they are legally obligated to produce goods without clearing large forests. Bioacoustics can quickly and cheaply determine how much forest has been left standing.

“Companies are adopting zero-deforestation commitments, but these policies do not always translate to protecting biodiversity due to hunting, habitat degradation, and sub-canopy fires. Bioacoustic monitoring could be used to augment satellites and other systems to monitor compliance with these commitments, support real-time action against prohibited activities like illegal logging and poaching, and potentially document habitat and species recovery,” Butler said.

Further, these recordings can be used to measure climate change effects. While the sounds might not be able to assess slow, gradual changes, they could help determine the influence of abrupt, quick differences to land caused by manufacturing or hunting, for example.

“It’s very hard to protect biodiversity if you don’t know which species live in a given area. But there simply aren’t enough adequately trained ornithologists, mammalogists, and other experts to go around and cover all the places that need to be studied or monitored,” said Wilcove, professor of ecology and evolutionary biology and public affairs and the Princeton Environmental Institute. “Zuzana and her colleagues have done some cutting-edge research to explore how the automated recording of all the sounds within an ecosystem like a tropical forest can be used to assess the health of the wildlife within that forest. Their new article succinctly summarizes the potential of these soundscapes to inform decision-making, and it provides some terrific suggestions for how to make this new technology a standard tool for scientists and conservation practitioners.”

The paper, “The sound of a tropical forest,” was published online as a perspective piece in Science on Jan. 4.