Paul Frymer, a professor of politics at Princeton University and the director of the Program in Law and Public Affairs at the Woodrow Wilson School of Public and International Affairs, studies democratic representation in the United States. His particular interests are the historical place of political institutions such as courts and parties in responding to racial and class inequality.

This fall, Frymer’s latest book, “Building an American Empire: The Era of Territorial and Political Expansion,” was published by Princeton University Press. The book examines the politics of American expansion, showing how the federal government’s land use policies — particularly those regulating the process of population settlement and removal — were critical to the nation’s racial formation.

Frymer’s previous books are “Black and Blue: African Americans, the Labor Movement, and the Decline of the Democratic Party” (Princeton University Press, 2008), which demonstrates the deficiencies of race- and class-based understandings of labor, equality and power in America, and “Uneasy Alliances: Race and Party Competition in America” (Princeton University Press, second edition, 2010), which examines the relationship between black voters, political parties and American democracy. 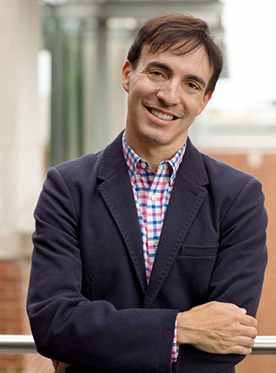 Why did you write this book?

First, although the book focuses on the history of 18th- and 19th-century U.S. continental expansion, I was motivated by many of the current-day headlines, and in particular, questions about the millennial issues of American empire and white populism. Both are dominant features of 19th-century continental expansion: the aspirations for a quite massive empire — one bigger than the current-day borders of the nation — and the expectation that this empire would be created by and established specifically for white settlers.

For instance, one of the findings of the book is that the United States government was consistently pro-immigration during that time, and offered lots of incentives, most notably free land, as a way to induce it. But before we point to this simplistically and say, ‘see, America has always been a land of immigrants,’ it is important to temper this with a reminder that this 19th century pro-immigration ideal was always understood to be narrowly specific to white Europeans, as was most of the distribution of free land.

Second, I am interested in the power and consequence of government policy. Here was a project — of American western expansion — that is widely seen as a result of individual entrepreneurship, and yet federal regulatory policy is everywhere. Land policy in particular was used to structure the process of expansion, enabling the government to determine the pace, scope, direction, and form of expansion and settlement at pretty much every stage. It was hardly ever perfect, and I spend considerable parts of the book talking about the failures of federal policy, but it was ever-present and consistently of profound consequence.

In this book, you shatter the myth of westward expansion being the result of individual “pioneers” seeking freedom and fortune. Why is that myth so pernicious? 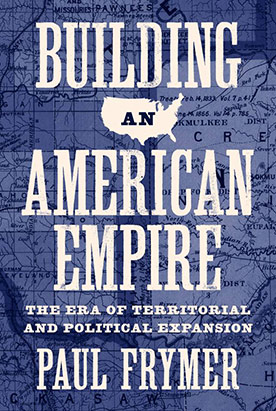 The myth remains profoundly embedded in our national spirit and memory because there’s important truth to it. There were individual pioneers seeking freedom and fortune, exhibiting bravery, intelligence, and equal parts democratic and imperial spirit. There are many noble and fascinating individuals worthy of celebration. But there has also always been a strong ethos and ideology that is resistant to the value of the federal government. It is an ethos rooted in self-reliance that both emotionally and intellectually denies the possibility that the government could have been of critical help, even though people were constantly asking the government for help in their efforts at settling on the frontier throughout the period of expansion.

There’s an interesting ironic tension at work: individuals continually reach out to the federal government asking to help them be successful in their individual entrepreneurship, not by asking the government to stay out of the way, but by enabling the opportunities for individuals to take advantage of. And this is where the myth is pernicious. It has taken a long time for Americans to recognize, let alone celebrate, the quite notable successes of the federal government during the nation’s development. The pioneers simply could not have done this alone, and denying the reality of federal intervention just reinforces a very false belief that Americans don’t need each other, particularly in the ways that the government helps mitigate against our collective irresponsibilities. This denial remains quite powerful and, I would argue, often dangerous in modern policy debates.

How did race play an important role in the building of empire?

Race and racism drove American expansion, both as a conquering imperialism for white Europeans and a willingness to ignore the indigenous populations that lived on the land as having equal rights and human value. Racism drove the Southern slave industry, which on its own pushed for further territorial forays —many of which were unsuccessful — into places like Cuba, Santo Domingo and Mexico. And at times, racism slowed down expansion and imperial aspirations.

As I say upfront in my book, expansion always meant a confrontation with who lived on the land. Some Americans, notably Southerners, were OK with incorporating these largely non-white populations because they had an ideology that could establish hierarchies under law. Other Americans struggled with non-white populations because they believed them unfit to be American citizens, but because of their own beliefs in liberal individualism, they had difficulty justifying long-standing hierarchies existing within U.S. borders. What they did in response was to oppose expansion into places where there were large populations of non-Europeans, and so America did frequently turn around and reject opportunities to expand into places like Cuba, further into Mexico, and into the Philippines.

What were you most surprised to learn in writing this book?

I learned a lot and was consistently surprised, which made it really fascinating to write. There are so many interesting details of expansion efforts, with numerous false starts and turns, and many moments when unintentional things happen that few at the time were able to recognize for their consequences. In some ways, I feel like the book wrote itself. My goal was to be a good tour guide and not get too much in the way.

Is there a lasting significance on the nation of these land and population policies?

There were many in the United States at the time who wanted a much more racially diverse nation that extended far into South America. Ironically, most of these advocates were from the South who saw the Southern continent as a way to maintain the institution of slavery in the face of widespread immigration from Europe that was settling lands in the West. If their vision had won, the United States might have had demographic patterns much more similar to a place like current-day Brazil. Had the South not been advocating for its interests at all — meaning had slavery never been an issue — the United States would likely look more like Canada, an overwhelmingly white nation with only more recent immigration from non-European spaces.

Moreover, we still see long-standing consequences from the success and failure of early land policies. Ohio and Indiana had very different land policies than Kentucky and Mississippi, encouraging very different types of settlements and economic development. Oregon was settled very differently than New Mexico. I don’t want to overstate this, but we see powerful remnants of these policies in the current demographics, economies and politics of these different states.

What is one part of this era of American history that your students connect with?

I think it most resonates for the politics of today. “Trump” is the last word of the book, and there is a reason for this. Americans continue to explicitly hold onto the ethos of the rugged individual settler, and many Americans continue to at least implicitly hold onto the belief that this rugged individual settler is specifically of European descent. In turn, the politics of the Trump era provides an opportune backdrop for all of us to reassess what constitute the fundamentals of American values.

The racial politics of the 19th century are often seen as historical relics, and ones that were only of “brief importance,” largely incidental to understanding the bedrock of what seemingly defines what it means to be an American. Exemplary here is the politics, violence and genocide of Indian Removal in the early 1800s, which is still largely viewed as a terrible event in American history, but one that was of a moment in time, seemingly divorceable from any further understanding of American national development. I argue that racial politics were hardly incidental to our national establishment, that the presence of both Native Americans and African Americans dominated national thought and politics well into the 20th century (and clearly beyond), and that we simply cannot understand and engage with the meaning of our nation without putting our history of racial exclusion as a starting point with long-standing legacies.