Thirty-one undergraduate students from colleges and universities across the U.S. attended the Public Policy and International Affairs Program’s (PPIA) Junior Summer Institute (JSI) this summer at Princeton University. Hosted by the Woodrow Wilson School since 1985, the rigorous seven-week program is designed to prepare the students for graduate study and careers in public policy and international affairs.

Four participants shared their impressions of Princeton, the JSI program, and the Woodrow Wilson School. Applications for participation in the 2019 program (June 12 – August 2, 2019) are due Nov. 1: Those interested may apply here. 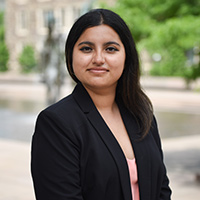 Who had the biggest effect on you?
The person who has had the biggest effect on me is my mentor DeAngela Burns-Wallace MPA ’98, who is vice provost at the University of Kansas. She is from the same area of Kansas City that I am from, and as a low-income woman of color she is a shining example to me that we can make it out of our communities and succeed in order to improve our communities.

What would you like to pursue as a career? How do you feel the JSI program has helped you on your way toward achieving that goal?
My goal is to be a Foreign Service Officer, and I feel that JSI prepared me by really showing me what skills it takes to be one. It also showed me the true depth of the duty and discipline a foreign service career will require. Additionally, through JSI I met former ambassadors and current FSOs, and they gave me invaluable advice to guide me toward my goal. 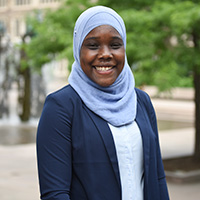 What was your most impactful takeaway from the JSI program at Princeton?
My most impactful takeaway was the importance of trying new things and stepping out of my comfort zone. Throughout the seven weeks at Princeton, I experienced the most growth when I pursued activities and situations I was least familiar with. This provided me the opportunity to learn more about myself as well as those around me.

Who had the biggest effect on you?
Student advisors Martín De Simone MPA ’18 and James Ladi Williams MPA ’18 had the biggest effect on me. They were invested in getting to know each student and making sure we enjoyed our time at the University. They became my role models because I knew they went through many challenges to get to where they were. It brought me joy to see them as leaders who pushed past barriers and successfully completed graduate school. As someone who never imagined completing a bachelor’s degree, let alone a master’s degree, their insights meant everything to me.

What would you like to pursue as a career? How do you feel the JSI program has helped you on your way toward achieving that goal?
Before JSI, I saw myself graduating from NYU with all the necessary teacher certifications to teach in New York City. Thanks to PPIA, I now see myself being able to pursue a master’s degree at the Woodrow Wilson School in the next three to five years. Reflecting on what I want to do before getting my master’s degree hasn’t been the easiest thing, but what I know for sure is that I will be engaging in public service. Participating in JSI increased my confidence and willingness to explore other career fields that fall under the public service umbrella. Having completed the program, I have never been more excited about what the future holds for me. 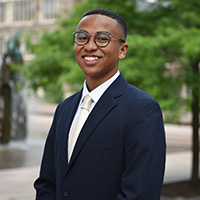 What was your most impactful takeaway from the JSI program at Princeton?
Policymakers must be equipped with instrumental skills, vast experiences, and a firm understanding of how to employ our unique perspectives to best serve American communities. JSI at Princeton coalesced these three critical factors to prepare aspirational leaders as we begin to take ownership of our nation's laws, policies, and political context. Through learning with a cohort of fellows who have inspired me tremendously, I am optimistic about the next generation of leaders JSI at Princeton is cultivating.

Who had the biggest effect on you?
Building relationships with Woodrow Wilson School MPA graduates who served as JSI program assistants (Martín De Simone MPA ’18 and James Ladi Williams MPA ’18) was one of the most fulfilling parts of this transformative fellowship. Through sharing their "Woo" experience and vast policy knowledge, these graduates modeled the type of public servants I hope to emulate in my graduate studies and professional career.

What would you like to pursue as a career? How do you feel the JSI program has helped you on your way toward achieving that goal?
As an overarching intention, I am committed to serving my country domestically and abroad. JSI at Princeton expanded my capabilities and fueled my aspiration to seek out a joint MPA/J.D. program in pursuit of my lifelong commitment to service. 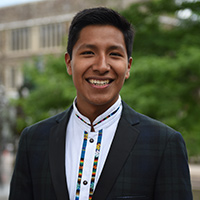 What was your most impactful takeaway from the JSI program at Princeton?
My most valuable takeaway from JSI was the community I built. I was able to grow as an individual and as a community member while at Princeton. We were present with one another and understood that our success in the program meant constant collaboration. The foundation to our success in the program and in the future was community; we studied long hours together, we played sports together, and we had endless laughs together.

Who had the biggest effect on you?
In addition to the other fellows, three of the JSI staff had a huge impact on my experience. Tom Stanley-Becker MPA ’18, Martín De Simone MPA ’18, and James Ladi Williams MPA ’18 were genuine and endlessly caring. They had real conversations with me, they supported me, they made me feel welcomed, and they helped me with gaining confidence on who I am as a person and what I can accomplish.

What would you like to pursue as a career? How do you feel the JSI program has helped you on your way toward achieving that goal?
I would like to work in education. I want to teach for some time before returning to graduate school. My end goal would be to influence education policy in an urban district. JSI helped me continue to learn about what tools are needed to succeed in policymaking and what paths I should be searching for.