The 2015 United Nations Climate Change Conference led to a historic agreement, in which 195 nations promised to reduce future greenhouse gas emissions. Questions still remain, however, as to how the global community will develop action plans to implement the agreement that are both scientifically and politically feasible.

Three graduate students from Princeton University’s Woodrow Wilson School chose to tackle these questions as part of a day-long climate change simulation competition prepared by the Network of Schools of Public Policy, Affairs, and Administration (NASPAA).

Cara Goldenberg MPA ’17, Bonnie Krenz MPA ’16 and Ken Sofer MPA ’17 were selected to represent the Wilson School in the Northeast region’s competition, held Feb. 27, 2016, at Columbia University – one of eight competition sites worldwide. More than 50 students spent their Saturday competing on one of three different teams at Columbia. 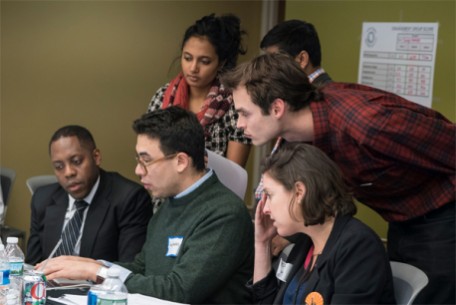 “Working with people from the other schools with varied backgrounds was wonderful,” Goldenberg said. “Everyone was very involved, and it was really rewarding to be around like-minded people who were excited about tackling this issue.”

This was the second year that NASPAA – the membership organization of graduate education programs in public policy, public affairs, public administration, and public and nonprofit management – offered this competition. This year, 375 students representing 135 universities participated across the eight sites.

First, each student assumed the role of a representative for one of seven "interest sectors." These interest sectors included carbon pricing, population and consumption, agriculture and land use, fossil fuels, sustainable energy, energy efficiency and "climate hawks," or environmental interest groups. Students brainstormed to come up with ideas their sector could implement to help limit global warming while causing minimal negative impact on their sector.

The competition’s overall goal was to limit the increase in global temperatures to 2 degrees Celsius (3.6 degrees Fahrenheit) or less by the year 2100. This goal is one many scientists believe is critical to preventing disastrous environmental consequences such as large disruptions in the world’s food supply and dramatic rises in sea level that could flood many coastal communities worldwide.

The second challenge required participants to work in teams to craft an action plan that would balance the needs of all seven sectors while still achieving the 2 degree Celsius climate change limitation. To explore various “what if” scenarios as they negotiated with each other to create a final plan, the teams used En-ROADS – a simulation tool developed by Climate Interactive, which focuses on how changes in global energy, economic and public policy could affect climate outcomes.

“I really appreciated that the model we were using was not just designed around how you physically and technically get to the 2 degree goal; it also factored in the constituencies involved and the political capital you need to pull certain policy levers,” Sofer said. “You can make the math work, but if you can’t sell it to the public the whole thing falls apart.”

In the third challenge, teams were required to prepare three communication tools designed to win support for their plan from the chiefs of staff to the Group of Twenty (G-20) heads of state: a confidential briefing memo, a staffing proposal and a power point presentation explaining the team’s recommendations and anticipated benefits.

“It was fun trying to design the written memos,” Goldenberg said. “In the beginning of the day, it felt like we weren’t getting anywhere, but in the end we were all onboard and agreeing. It was interesting how that evolved.”

“I helped craft my team’s presentation,” Sofer said. “We had to determine how you frame what you are doing in a positive way, in a way that is politically salient, that is going to get buy in from a larger community. We wanted to communicate the message that we were still going to be able to have a thriving economy and raise the standard of living without having the kind of carbon emissions that traditionally come with it.”

At the close of the competition, members from each team gave an oral presentation and participated in a question-and-answer session that followed. Krenz was one of three individuals selected to present her team’s proposal.

“The nice thing about presenting at a simulation like NASPAA,” Krenz said, “is that it’s a low-risk environment in which to practice public speaking and thinking on your feet in a Q&A session – but with just a little more pressure than we usually experience in school, because you’re being judged by a room full of strangers.”

Having achieved the highest-combined score, Krenz’s team was named the winner from the Northeast region, becoming one of eight semi-finalist teams worldwide. A video of her team’s presentation, in which Krenz is featured as the first speaker, is posted on the NASPAA competition website.

Three “super judges” subsequently reviewed the work of all eight semi-finalists. Although Krenz’s team was not chosen as the overall global winner, Krenz joins Goldenberg and Sofer in affirming that participation in the competition was a worthwhile experience.

“The most eye-opening part of the experience for me was just how hard it was to limit warming to 2 degrees Celsius,” Krenz said. “I have some background in climate policy so I know it’s a big challenge, and yet I was still surprised at just how difficult it was, when you start really digging into the numbers. I just wish more people, especially in government, would realize the urgency and magnitude of this issue – but at least the people at the simulation left with a better understanding of the issue.”

For more information about the NASPAA competition, click here.