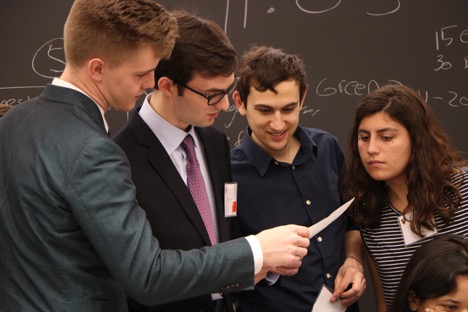 The goal of the simulation is to create a no-stakes environment in which students can experience some of the pressures and thought processes real policymakers undertake as they make decisions with far-reaching consequences. Students were divided into four teams representing different countries and asked to formulate a grand strategy and to make decisions on how to execute that strategy based on their personal priorities and the amount of resources at their country’s disposal. They also had the opportunity to plan and execute diplomatic, military and covert operations. Although the players had to respond to some crises and events injected by the control cell (composed of CISS student fellows), the game was dictated largely by the choices, actions and reactions of the country teams.
Tom Koenig ’20 noted the simulation was “a great experience and a lot of fun,” and he felt the most interesting part of the game came at the end when some of the country’s long-term strategies were brought to fruition. He noted, however, that because of the limited nature of the scenario, there "was no need to worry about the sorts of repercussions that would result from those sorts of moves if there had been another round.” 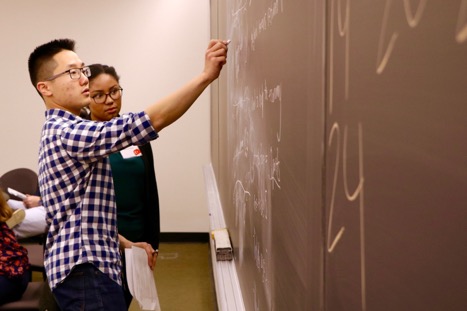 The simulation further aimed to help students understand the challenges leaders of foreign countries must confront, including countries whose policies the students may not be familiar with. For example, many players on the Russia team said they gained a greater appreciation for Russia’s current economic struggles. Because of these constraints, they devoted resources to cyber operations aimed at sowing chaos.
Meanwhile, players on the China team learned their efforts at signaling peaceful intentions had been less successful than they hoped. In the last round, when they reversed course and attempted to conquer Taiwan, they found their forces had to contend with a vastly improved U.S. Navy, which the United States team had spent several decades (rounds) building up on the side.
“I thought this was an amazing opportunity to bridge classroom learning and real-world applications [by] [simulating] 30 years of strategy and vision in just one morning,” Noah Schochet ’21 said. He further noted it “was a fun way to compete with and against my peers and learn more about the countries and their role in the international order.”
The Grand Strategy Simulation ultimately is about teamwork, long-term strategic thinking, and tradeoffs. The complex and sometimes rapid-fire interactions reflected the intense but entertaining learning environment the organizers hoped to create to help train the next generation of leaders in the service of humanity.