Participants in last fall’s graduate Policy Workshop, “Building Ties with Former Enemies,” met with officials from the U.S. State Department and the National Security Council in Washington, D.C., on Dec. 18, 2015, to present recommendations designed to advance the normalization of U.S.-Cuba relations.

The class divided their recommendations into two phases of activity designed to occur in conjunction with President Barack Obama’s then-stated intent to visit Cuba before the end of his presidency – a trip he recently announced will occur March 21-22, 2016.

“We all enjoyed the fact that we were working on an evolving question,” Bonnie Krenz MPA ’16 said. 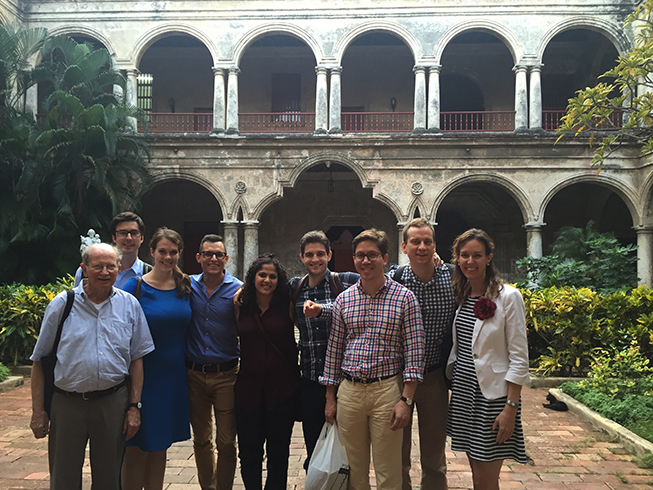 Policy Workshops are a unique feature of the graduate curriculum offered by the Woodrow Wilson School of Public and International Affairs. They provide students the opportunity to explore a current policy challenge through both the preparation of individual research papers and collaboration on a group policy report. The final document includes recommendations that the students present to a client or expert group.

Part of the workshop includes a trip over fall break to conduct field research. The trip is largely planned and executed by the students in the workshop. Making plans for travel to Havana proved especially challenging for this workshop, in light of the fact that Internet access in Cuba is extremely limited.

The expertise and contacts provided by the workshop leaders – Stanley Katz, professor of public and international affairs and the director of Princeton’s Center for Arts and Cultural Policy Studies, and Daniel Kurtzer, lecturer and S. Daniel Abraham Professor in Middle Eastern Policy Studies and former U.S. ambassador to Israel and to Egypt – proved to be very valuable as the students mapped out their trip. 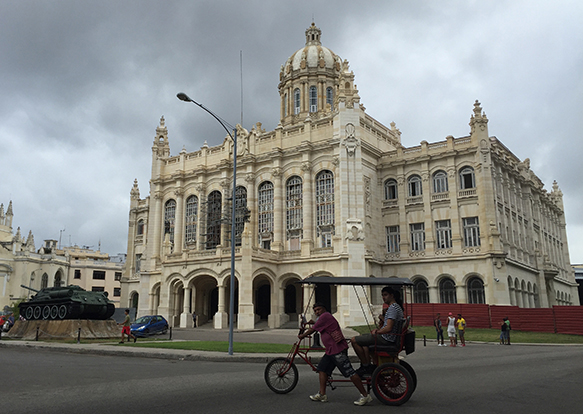 “There’s still quite a range of ideas among the Cuban people about how their economy and political system should evolve and reform,” Jennifer Williams MPP ’16 said. “The Cuban government wants to move slowly; they want to pace the American investment. Older generations have lived their lives dependent on a strong social welfare state and are more skeptical of change, while many young people want new opportunities and have their own entrepreneurial ideas.”
Workshop participants also met with Jeffrey DeLaurentis, chargé d’affaires at the U.S. Embassy in Havana, and Ali Rodriguez Araque, the Venezuelan ambassador to Cuba.
“The Venezuelan meeting was relevant to the report from the perspective of regional dynamics,” Krenz said.
“Venezuela provides substantial political and financial support to Cuba,” Williams said. “Given the strained U.S.-Venezuelan relationship, it was interesting to hear Araque speak about the Venezuelan perspective regarding the warming relationship between the United States and Cuba.”
The workshop not only gave participants the opportunity to study U.S.-Cuba relations, but also the chance to look for lessons that could be drawn from U.S. relations with a former and a current “enemy nation,” Vietnam and Iran. Several guest lectures aided in this process, including presentations by L. Desaix Anderson ‘58, who opened the U.S. Embassy in Hanoi after diplomatic relations were established in 1995, and by John Limbert, the current Gruss-Lipper Visiting Scholar in Middle East Policy Studies at the Wilson School, who was appointed in November 2009 as the first-ever U.S. deputy assistant secretary of state for Iran.
In preparing their final policy report, students focused their recommendations on the need for the Obama administration to achieve tangible breakthroughs on several fronts this year, including progress towards dismantling the U.S. economic embargo on Cuba and improvements in human rights conditions in Cuba. They also presented a discussion of perceived parallels between U.S.-Cuba relations and possible future improvements in the U.S.-Iran relationship. The students concluded that “normalization with Iran would include many of the difficult issues highlighted in this report, such as dismantling a complex sanctions architecture, dealing with human rights concerns and normalizing the economic relationship.”
In addition to Krenz and Williams, the workshop participants included Ben Birnbaum MPA ’16, Sara Elsayed MPA ’16, Eduardo Massieu MPA ‘16, Christopher Page MPA ’16, Alejandro Rodriguez Ramirez MPA ’16, Andrei Seeto MPP ’16 and Mike Weber MPA ’16.

(The photo above and on the home page, showing the flags of Cuba and the United States, was taken at the International Trade Fair in Havana. Photo credit: Jennifer Williams MPP ’16.)