This Q&A is part of a series featuring panelists who will participate in the Princeton-Fung Global Forum. This event, to be held March 20-21 in Berlin, is being organized by the Woodrow Wilson School of Public and International Affairs.

Governments around the world tried to shut down the internet nearly 50 times in 2016, raising serious questions about the value and harms of online censorship in a world dramatically influenced by the digital sphere.

In this Q&A, Jillian York of the Electronic Frontier Foundation (EFF), explains what she sees as the risks associated with online censorship and mass surveillance. An avid blogger, York is the EFF's director for international freedom of expression and is based in Berlin.

York will be a panelist at the Princeton-Fung Global Forum, “Society 3.0+: Can Liberty Survive the Digital Age?” in the session “Access (Denied) to Information."

Q. Your work focuses on online censorship, corporate social responsibility, bloggers’ rights and mass surveillance. What are your biggest concerns within some of those areas? 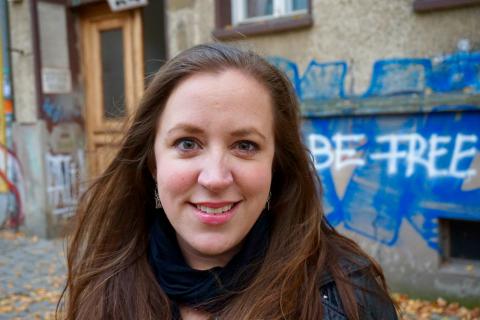 York: All of these areas are of great concern and have so much overlap. Right now, most of our communication takes place on corporate platforms — platforms that have restrictions on content, sell user data to advertisers, and at times, share user information with governments. I don't think we're as concerned yet about that as we should be. What we think of as the "public sphere" is not always supportive of what's in the public's interest.

That said, we also can't forget that many governments place more direct restrictions on online activity through a number of ways, including blocking websites or cutting off internet access entirely; arresting bloggers and social media users; and conducting targeted surveillance and attacks.

Q. In a world where fake news stories were part of the U.S. presidential election, what is the role of online censorship? How can it best be used? And how is it detrimental?

York: I don't see censorship as a solution to anything. And censorship ALONE — as it's usually applied — is particularly useless. Take, for example, hate speech. It's generally not illegal in the United States (for First Amendment reasons), but most companies place restrictions on it. This might seem fair to many people who certainly don't want to see hateful, racist statements turn up in their feeds. So it solves that problem, but does it solve the bigger problem in our society, the fact that racism and hate are widespread? Not without some form of education along with it, and that isn't happening.

The fake news controversy, I think, got a bit convoluted in the press. I see a big difference between user-generated content — that is, the fake news story that your aunt or uncle posted — and the content that Facebook can curate, such as its trending topics or suggested articles (the links that come up beneath a post). I don't think any reasonable person would say that Facebook taking greater control over that curated content is censorship.

Q. Access to information is not equal throughout the world. How do these divides affect citizenry and the balance of power?

York: When access to information is cut off to a certain group or groups, there is inherently unequal distribution of power. Globally, this means that those living in countries where the web isn't restricted (or is only marginally so) have a leg up in a global economy. And often, it's post-colonial states which have already suffered plenty at the hands of colonizers, that have leaders who cut off access to the internet, leaving those countries even more behind in terms of global development.

Q. What inspired your path into blogging and working within the digital world?

York: Moving abroad in the early 2000s! This was before Skype and WhatsApp and easy, quick connections to home, so I started up a blog to keep my friends and family abreast of what I was up to in Morocco. I quickly discovered online censorship through direct experience (the platform I was blogging on got blocked there), then later met all kinds of local bloggers who introduced me to the regional blogging scene, and from there propelled me into the work that I do now.

Q. What projects are you currently working on at the Electronic Frontier Foundation (EEF)? What other projects do you have in mind for the future?

York: Right now, there are two EFF projects that have me really stoked: Onlinecensorship.org, which I co-founded in 2012 and which won the Knight News Challenge in 2014; and Surveillance Self-Defense, a project that I helped manage through its redux a couple of years back and which is now expanding. What makes me so proud of both projects (other than the fact that I think they're really important!) is that they're both built by amazing collaborative teams that in some cases are working across 9-hour time differences!

Onlinecensorship.org looks at the censorship taking place on social media and tries to hold companies accountable for it, while Surveillance Self-Defense seeks to help individuals take control over their own online security.

In the future, I hope to find a way to make people more aware of national-level censorship taking place around the world...it was a hot issue from 2009-2012 or so, but then the Snowden revelations brought surveillance to the fore, allowing us to easily forget that there are countries that still disable internet access entirely at times!