The intersection of religion and politics has touched many issues from the early twentieth century to present. From divorce to civil rights to domestic policy, this connection has have played a significant role in shaping American political development across decades.

This dynamic is examined in detail in a new volume, "Faithful Republic: Religion and Politics in Modern America," co-edited by the Wilson School's Julian Zelizer, Malcolm Stevenson Forbes, Class of 1941 Professor of History and Public Affairs, along with co-editors Andrew Preston from Cambridge University and Bruce J. Schulman from Boston University.

Stretching beyond separation of church and state, the co-editors examine many aspects of American political history including liberalism and conservatism and economics. Combined, the essays illustrate the pervasiveness of religion in American political life.

We discussed the book, which was published by the University of Pennsylvania Press, with Zelizer for our Q&A series. 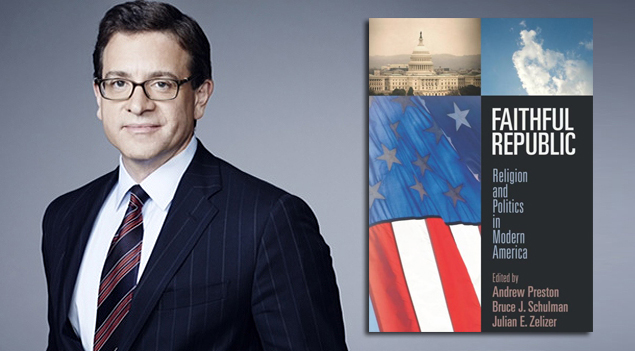 Q. How did this book come to be?

Zelizer: The book came out of an ongoing collaboration with Boston University and Cambridge University. Every year we hold a conference on a new theme in political history. We try to bring together some of the brightest and most interesting voices studying a new area of scholarship. We felt that there was a critical mass of work on religion and politics so put this together. We believe that this book will help to define this field of scholarship.

Q. What are the key takeaways from the book?

Zelizer: The major takeaway is that the line separating religion from politics is much thinner than most people think. The book explores multiple ways in which we see the intersection between these two spheres of society. We move away from the traditional question of the separation of church and state, looking at other ways in which religion has impacted politics and vice versa.

Q. What policy implications can be gleaned from the book?

Zelizer: There are no specific policy implications, other than the fact that many of our debates over public policy are shaped by the way in which specific religious organizations, ideas and leaders influence public debate.