As a Princeton University undergraduate, Alisa Tiwari '14 evaluated New York City’s controversial stop-and-frisk program for her senior thesis. With a background in domestic policy, African-American studies, and urban studies, and drawing on her coursework in politics, policy analysis, and statistics, she spent countless hours analyzing police data, reviewing the relevant legal issues, and considering the perspectives of both officers and community members to assess the efficacy, constitutionality, and broader societal impacts of the practice. Her thesis, “Watch Where You Walk: An Evaluation of Stop and Frisk in New York City," earned her the J. Welles Henderson '43 Prize in Legal Studies from Princeton’s Program in Law and Public Affairs.

Being accepted into the 2014 cohort of the Scholars in the Nation’s Service Initiative (SINSI), based within the Woodrow Wilson School of Public and International Affairs, provided Tiwari the opportunity to gain real-world experience in the field of law enforcement reform. Established in 2006, the SINSI graduate program combines a Wilson School MPA degree with a fully funded, two-year professional-level practical work experience in the U.S. government. Tiwari is expected to complete her MPA in 2020. 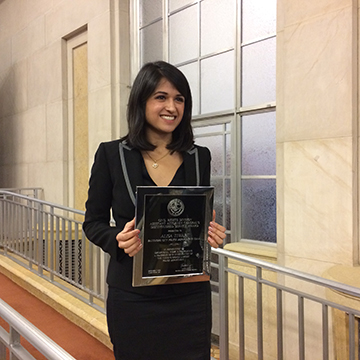 During her SINSI fellowship, Tiwari pursued her interest in policing issues in the Civil Rights Division of the U.S. Department of Justice (DOJ). Working in the Office of the Assistant Attorney General, she was a policy analyst for the head of the division, assisting with research projects and analyzing topics ranging from criminal justice reform to religious tolerance. Not long after she arrived, she was assigned to the team investigating the Baltimore Police Department and spent more than a year working on this project.

The investigation examined whether there were widespread civil rights violations in the police department’s stop, search, and arrest techniques and use-of-force practices, including officer-involved shootings. It also assessed whether discriminatory policing was a systemic issue in the department.

“I don’t think I would have been afforded the opportunity to join the investigative team if I did not have a background in policing issues from my time at Princeton,” said Tiwari. “My courses and especially my thesis provided me with a much-needed background at a time when a string of officer-involved deaths of unarmed black men were capturing our nation’s attention and spurring reform efforts.”

Tiwari had no idea what to expect when she joined the investigation. She still remembers her first week on the team. Asked whether she could go on a ride-along in Baltimore, she didn’t know what this would entail, but soon learned that it involved shadowing a police officer by being in the vehicle throughout his or her shift.

“You get a better understanding of the policing landscape in a city and learn about the perspectives of police officers on the job,” she said. “Within 24 hours, I was strapped into a bulletproof vest, sitting in the front seat of a police car, on patrol with an officer until the early hours of the morning.”

By the end of the investigation, she had completed ride-alongs in almost every district in Baltimore and reviewed hundreds of pages of documents, from policies and training manuals to internal affair files. Just as memorable to Tiwari were the community outreach efforts, which included meetings with a range of individuals across Baltimore, from youths in summer camps to religious leaders at churches. Their stories and insights guided the team’s investigative efforts. Regardless of the activity, Tiwari said, working on the investigation challenged her daily.

The Baltimore team won a Department of Justice distinguished service award for its work, and Tiwari additionally received an individual award from DOJ, a Certificate of Commendation, for her contributions to police reform. For Tiwari, completing the Baltimore findings report represented a concrete step forward on the long road toward reform for communities that have faced decades of unfair treatment.

For the second rotation of her two-year SINSI fellowship, Tiwari joined the Civil Rights Unit of the Southern District of New York U.S. Attorney’s Office. She assisted with some of the office’s disability rights work, but her primary focus was investigating a prison in upstate New York for its use-of-force practices with inmates — in particular, whether there was a pattern or practice of excessive force. That investigation is ongoing.

Tiwari’s SINSI rotations exposed her in real time to the issues that captured her attention as a student and allowed her to explore a diverse set of interests, from police and prison reform to religious tolerance work to disabilities rights. She found the work, while often difficult, to be rewarding. Her colleagues, lawyers whose intelligence and dedication to civil rights were truly inspiring, worked day and night to fight for fairness and equality. They did their work with compassion, humility, and kindness. Along the way, they encouraged Tiwari to be creative and push back on boundaries.

“I feel very lucky to have such mentors and hope to bring the lessons I learned from them to graduate school and beyond,” said Tiwari. “When so many communities across the country still confront stark inequalities, lawyers and policymakers can have a unique role in shining a light on, probing, and reforming injustice. But reform cannot simply be a top-down process. Without community support and accountability mechanisms, change will be neither effective nor lasting. Ultimately, the community members outlast the policymakers — crucial to remember in creating sustainable change.”

For Princeton seniors and first-year MPA students interested in applying for the 2018 SINSI graduate cohort, applications are due Nov. 6, 2017 at noon.