For Alexandra Kasdin ’14, MPA ’18, a passion for wildlife conservation began when she was eight years old. Inspired by her first grade teacher—who had a classroom full of animals and lesson plans devoted to endangered species and the environment—Kasdin knew she would spend her life working toward wildlife protection.

In elementary, middle and high school, Kasdin served as a Girl Scout, devoting her service projects to endangered species conservation. For two and a half years in high school, she worked at the Philadelphia Zoo, assisting with educational programming and talking to visitors about wildlife. One summer in high school, she traveled to assist with a biological field research project on whales and dolphins through the Earthwatch Institute. At Princeton University, Kasdin majored in ecology and evolutionary biology with a certificate in environmental studies and, though she loved biology, she knew she wanted to contribute toward conservation on a broader scale.

“I wanted my work to have a large people component. I’m really interested in the intersection of people and wildlife, how people interact with wildlife and learn about wildlife. I’m also interested in engaging with people on a daily basis,” Kasdin said.

So when Kasdin found out about the Scholars in the Nation’s Service Initiative (SINSI), it seemed like the perfect opportunity to explore a future in environmental policy.

SINSI is a graduate program that combines a Master in Public Affairs (MPA) degree at the Woodrow Wilson School of Public and International Affairs with professional-level practical work experience in the U.S. government. SINSI scholars are placed in jobs with an executive branch department or agency of the federal government through a fully-funded, two-year full-time fellowship between the first and second year of the MPA program. (For changes to SINSI's structure, click here). In Kasdin’s case, she sought opportunities within the U.S. Fish and Wildlife Service.

“As someone who’s been engaged with endangered species since a very young age, I’ve known about the Fish and Wildlife Service for a long time, and I always thought it would be really cool to work there. SINSI provided me with that opportunity,” Kasdin said. “SINSI really opened the door for me to explore opportunities in the federal government in ways that I never would have had otherwise.” 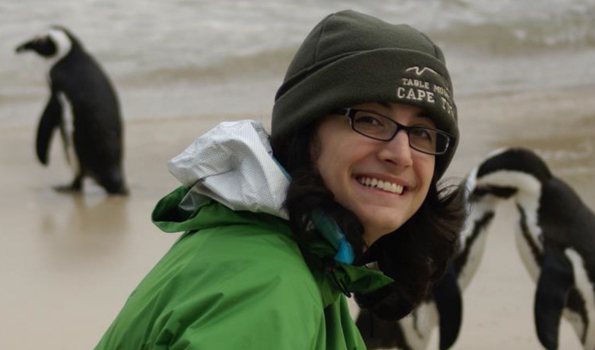 Kasdin was first placed in the agency’s headquarters in Washington, D.C., during the summer following her senior year at Princeton through SINSI’s summer internship component. Approximately 10 percent of the U.S. Fish and Wildlife Service works in Washington, D.C., creating nationwide policy and overseeing programs, while the remainder is focused at the resource level across the nation, working at refuges or in regional offices. That summer, Kasdin helped to write the internal service policy on their Urban Wildlife Conservation Program; in so doing, she helped to develop strategic initiatives that would engage new audiences in conservation near urban areas.

"I started the SINSI program in headquarters to get that broad perspective, to see what opportunities there might be and where I might want to spend my two-year fellowship,” Kasdin said. “I received a lot of encouragement to get field experience and to know what it’s like to work at the resource level.”

SINSI’s two-year fellowship generally consists of four six-month rotations, where scholars experience a range of positions and locations within their agency. Kasdin's first rotation lasted three months beginning immediately after her first year of the MPA program. She worked at the Minnesota Valley National Wildlife Refuge (MVNWR), part of the agency’s National Wildlife Refuge system, which manages a national network of lands and waters set aside to conserve America’s fish, wildlife and plants. Located near the Twin Cities, MVNWR was given special status as an urban refuge and is thus an integral part of the Service’s Urban Wildlife Conservation Program.

"I worked in the field with visitors, performed biological surveys, learned how the equipment worked and helped to manage 14,000 acres of public land,”Kasdin said. “It was really interesting to have worked on the policy at headquarters and then to go to a refuge that is effecting that policy and trying to implement this program, and to get that different perspective.”

Many of Kasdin’s experiences at the field level were very different from what she’d worked on in Washington.

“I wore waders for the first time, so I could go through ponds and wetlands to survey them, and I almost flooded the waders many times,” Kasdin joked. “My co-worker, who was doing the surveys with me and showing me the ropes, was careful to walk behind me to make sure I essentially didn’t drown.”

In Minnesota, Kasdin’s day job varied from reviewing documents to spending hours collecting seeds from a native prairie that would be used to restore other prairies miles away.

After her first rotation, Kasdin next moved to Hadley, Massachusetts, in September 2015. She works in a regional office that serves as a liaison between the field level and the service’s headquarters in Washington. There, she supports the field with guidance and resources and ensures the field level complies with national policies and guidelines.

“I’ve really liked that position, to be close to what’s happening on the ground but also to have that bird’s eye view to think strategically and creatively about how to help the field implement programs. I get to support the field from a broad perspective by working in the office, and I also get to experience what I’m helping to protect and the places that originally inspired my passion for conservation and wildlife,” Kasdin said.

In Hadley, Kasdin worked on creating an evaluation protocol for the Urban Wildife Conservation Program, the program she had helped codify in policy while in Washington and had implemented in Minnesota.

“The [Fish and Wildlife] Service is really curious to understand whether we’re achieving our goals through the programming we’re creating in these urban areas and whether we’re effectively building this ‘connected conservation constituency’ of individuals who are aware of conservation and wildlife, and so I’ve been working with a national team of people to develop an evaluation,” Kasdin said. “What I learned in my first year of the MPA at Princeton, and a lot of what I’ve learned from my MPA classmates, has been really helpful in that project.”

Kasdin also has been writing a business plan for partnerships between nonprofit organizations, community organizations and the U.S. Fish and Wildlife Service in six cities across the country. These partnerships aim to create relevant programming for urban audiences and help them preserve greenspace and connect to the outdoors in their cities. On top of that, she’s been working on creating a comprehensive inventory of all the officially designated “wilderness” areas in her region, as well as some communications about budget.

In her free time, Kasdin leads a Girl Scout troop, much like the one she was active in for most of her childhood.

“Girl Scouts was a big part of my elementary, middle and high school experience, and really crucial to my decision to pursue a career in public service and environmental conservation specifically,” Kasdin said. “I wanted to give back to the organization for everything it gave me.”

In May 2016, Kasdin will next start another rotation in Colorado for the U.S. Fish and Wildlife Service's regional office of the Mountain Prairie Region, working on administration of the Endangered Species Act (ESA). She’ll be working for a branch of the U.S. Fish and Wildlife Service that lists and delists threatened and endangered species, creates recovery plans for threatened and endangered wildlife and plants and consults with any federal agency that may take actions that would impact an endangered species, among other responsibilities under the ESA.

“I love what I do,” Kasdin said. “I’ve gotten to see all sorts of ecosystems and wildlife over the past year and a half, and I’m excited to keep seeing more. There are so many beautiful places in our country that I haven’t experienced, and every time I go to a new place, it inspires me to keep doing the work that I’m doing.”

“I feel very grateful for the opportunities I’ve had, and I think that’s on the part of both SINSI and the Fish and Wildlife Service,” Kasdin said. “Both at Princeton and the Service, people have been incredibly welcoming to me and incredibly generous with their time, advice, perspective and mentoring. I feel like I have a family that is incredibly passionate about helping me succeed and helping me get the best opportunities and experiences possible.”