A group of Woodrow Wilson School students took part in a crisis simulation in which “senior officials” across the Asia-Pacific region confronted two significant challenges: a clash between China and the Philippines brewing in the South China Sea and the prospect of serious instability on the Korean peninsula. 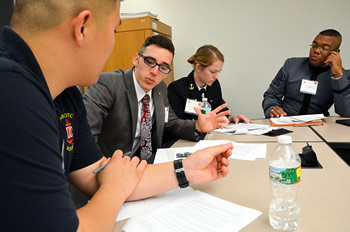 The simulation, organized by Princeton’s Center for International Security Studies (CISS), was oriented around the interactions between the United States, China, the Philippines, Japan and the Republic of Korea.

More than 80 participants – including Princeton undergraduate and graduate students, West Point cadets, Naval Academy midshipmen and students from Rutgers University and the New Jersey Institute of Technology – played the roles of political and military officials from those five countries.

During the Oct. 18 event, participants had to negotiate diplomatic agreements, present public statements and work together to achieve varying political, military and diplomatic objectives. The simulation gave life to the myriad obstacles involved with crafting effective strategies in the real world. Adding to the realism, each student team was advised by a Princeton student or a visiting guest with real-world policy or military experience.

Each "country" was divided into two groups – executive and military – and they were prohibited from meeting together in the same room. Instead, they had to communicate with one another in public spaces, where they ran the risk of being overhead by other teams. The rule simulated the fact that, in times of crises, it can be difficult to get all decision-makers in the same room at the same time, impairing effective communications. Additionally, the various teams were given conflicting information, impeding their ability to reach negotiated agreements. 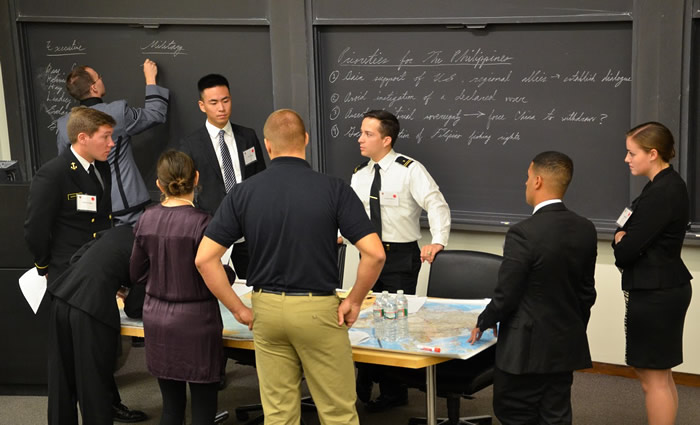 “The simulation is a fantastic way to build personal bonds among students who will one day represent their countries on the world stage," said Travis Sharp, a Ph.D. student in security studies and director of CISS' Strategic Education Initiative. "Students learned firsthand the extent to which time pressure, cognitive limits, and interpersonal dynamics affect choices about strategy, just like in the real world.”

The crisis simulation is part of a broad range of events run by CISS.

"The CISS Strategic Education Initiative sponsors a number of activities designed to give students some exposure outside the classroom to the challenges of strategic decision making," said Aaron Friedberg, CISS co-director and professor of politics and international affairs at the Wilson School. "In addition to crisis simulations, SEI organizes an annual staff ride to the Gettysburg battlefield. This spring we will also be sponsoring a staff ride to Normandy, site of the 1944 Allied invasion of Europe. Like all of our events, these will be organized and led by students, including undergraduates, Ph.D. and master's degree candidates. Their commitment and enthusiasm are crucial to the program’s success.”