May 18 2015
By Eric Falcon '15
Topics Globalization, Foreign Policy, Trade Globalization, Foreign Policy, Trade
Share
On April 27, the “Diplomacy and Chronic Conflicts” undergraduate policy task force presented its research and recommendations at the United Nations and The United States Mission to the United Nations, both in New York City. Led by Daniel Kurtzer, S. Daniel Abraham Visiting Professor of Middle East Policy Studies and lecturer at the Woodrow Wilson School of Public and International Affairs and former U.S. ambassador to Egypt and to Israel, the seminar looked at case studies in which ongoing conflicts challenged classic diplomacy techniques.
“Our trip to the U.N. gave us incredible insights into the inner workings of the diplomacy we’d only previously experienced in the classroom,” said Isabela Peña ’16, a member of the task force. “It proved fundamental to a well-rounded understanding of the topics we were studying.” 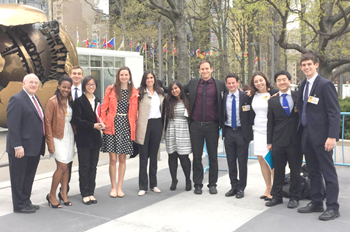 Since February, the eight juniors of the task force, two senior commissioners and a graduate assistant from the Wilson School’s Master in Public Affairs program have conducted research on how diplomatic tools can be used to address drawn-out social conflicts. In drafting the final report’s policy recommendations, the class considered how its findings were pertinent to the work of the U.N., honing in on the field of preventive diplomacy, in which quick, short-term efforts are made to stop a foreseen conflict from evolving. Each junior also applied the analysis to a case study that formed the basis of his or her junior paper.
The students first presented to Anthony Banbury, the U.N.’s assistant secretary-general for field support. Banbury encouraged the students to add nuance to their discussion of the U.N.’s diplomatic neutrality as well as the bureaucratic intricacies of operating through the U.N. Task force presenters included Ella Cheng ’16 and Justin Ziegler ’16.
The students then headed to The United States Mission to the United Nations where they presented to Ambassador Isobel Coleman ’87, U.S. representative to the U.N. for U.N. management and reform and a Wilson School undergraduate alumna. Presenters included Peña and Oliver Sun ’16, who discussed the role the United States has to play in supporting the U.N. diplomatic endeavors, specifically as they pertain to preventive diplomacy.
Coleman stressed the difficulty of mustering sufficient political will among U.N. member states, implying that insufficient information is not necessarily what impedes effective U.N. preventive diplomatic action as the students’ findings argued.
Also in attendance for the presentation was William Wagner ’10, MPA’14, a former Scholars in the Nation’s Service fellow who is currently working in the political section of the U.S. Mission.
The trip to New York City was a success for the members of the task force, who were able to engage in informed and critical discussions with the interlocutors. Kurtzer was pleased with the visit, noting that it was a fitting conclusion to the semester’s work and was certainly enriching to both the juniors’ individual research and the task force final report.
The summary report by the task force reflected the recommendations of Wardah Bari '16, Ella Cheng '16, Oluwatomisin (Tomi) Johnson '16, Jess Lee '16, Andrew Mullen '16, Isabela Peña-Gonzalez '16, Oliver Sun '16, Diana Turbayne '16 and Justin Ziegler '16. Eric Falcon '15 and Mia Rifai '15 served as senior commisioners and Nadav Pollak served as a graduate consultant. The students were directed by Daniel Kurtzer, S. Daniel Abraham Visiting Professor of Middle East Policy Studies and lecturer at the Woodrow Wilson School of Public and International Affairs and former U.S. ambassador to Egypt and to Israel.