This year’s crisis simulation centered around ethnic unrest in Estonia. Players were divided into teams acting as the executive and military branches of Germany, Poland, Russia, Ukraine and the United States. Tensions quickly escalated as each team vied to protect its own interests under conditions of information uncertainty. 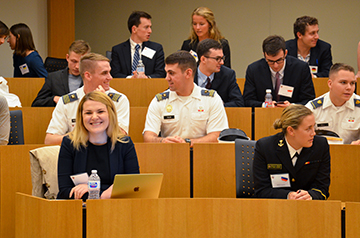 Students found themselves grappling with vexing but realistic challenges that mirrored those faced by real policymakers and military leaders today. Over the course of the simulation, while the U.S. and its allies braced for a possible conventional conflict, Russia sowed chaos with cyber-espionage and covert military action.

Maia Otarashvili, a research fellow and manager of the Eurasia Program at the Foreign Policy Research Institute, served as a subject matter expert for the simulation and noted that the challenges confronting the participants reflected some of the real-world difficulties facing the U.S. and its NATO allies.

“The NATO member-states were limited in their options to act, and instead kept on mobilizing their forces in the region,” Otarashvili said. “This type of a standstill, while frustrating, was a very realistic way to illustrate the complex nature of hybrid warfare in today’s Eurasia.”

The central challenge participants grappled with was how to overcome the communication and information problems that plague real-life decision-makers, especially in the midst of a crisis. At the start of the simulation, civilian and military cells from each country met to formulate a cohesive strategy. Team cells were then divided into separate rooms and permitted to meet only in public spaces during subsequent rounds. These rules were meant to simulate the communication issues that often hamper bureaucracies, as well as the “fog of war,” in which information becomes distorted or lost.

Many players initially struggled with how to effectively coordinate the actions of their executive and military cells. Sakari Ishetiar MPA ’19 said because his “government counterparts did not have a formal mechanism or requirement to tell their military what [they] had done in the previous round,” the military ended up having to rely on outside, sometimes unreliable information, in order to keep abreast of what decision-makers on their team were doing. 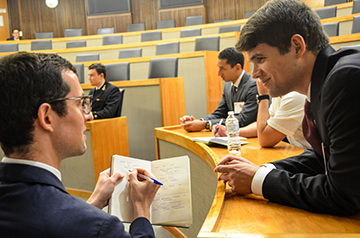 Many teams faced similar challenges, and the effects of miscommunication further complicated gameplay. Ultimately, the most successful teams were those that were able to overcome these challenges by establishing effective channels of communication.

Graham Upton, a Naval Academy midshipman, said his “biggest takeaway was communication…[Our] group established a solid system of [communications] that allowed our executive and military branches to stay on the same page.”

The goal of the simulation was for players to come away with a deeper understanding of a critical international security issue and also to learn through trial and error what effective coordination among leaders at the highest levels should look like.

Lieutenant Abraham Trindle MPP ’18, who served as a team advisor, felt the simulation was an invaluable learning experience for all involved.

“I would say that in my brief time on campus, at a school that prides itself on producing policy leaders, this event stands alone in its ability to create conditions that promote critical leadership development,” he said. “The crisis simulation brings together an intelligent and diverse group of young folks and then forces them to do more than just have a discussion; it forces them to generate and execute winning strategies.”

In 2016, the fall crisis simulation focused on an imagined scenario in which political instability in Pakistan created regional unrest and raised the specter of a conflagration in South Asia. In 2015’s fall simulation, “senior officials” across the Asia-Pacific region confronted two significant challenges: a clash between China and the Philippines brewing in the South China Sea and the prospect of serious instability on the Korean peninsula. Past simulation topics have included conflict crises in Syria, Eastern Europe, India and Pakistan, Korea, the Asia-Pacific, and U.S.-China-Russia relations.