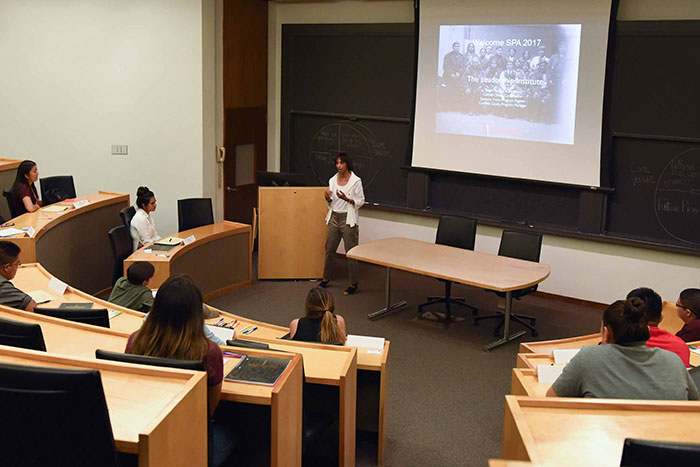 Launched in 2008, the SPA program is co-sponsored and co-directed by Regis Pecos ‘77, former chief of staff to the speaker of the New Mexico House of Representatives and former director of policy and legislative affairs for the Office of the Majority Floor Leader. Pecos also is a retired Princeton trustee and member and former governor of the Cochiti Pueblo. The other co-founder and co-director is Carnell Chosa from Jemez Pueblo.

“The program has provided phenomenal opportunities for nearly 300 high school students from New Mexico,” Pecos said. “The research and advocacy that was part of their experience in this program has helped to define their career paths. Many reflect upon this experience as a turning point in their lives.”

Through the SPA program, Pecos hopes to nurture students with a sense of commitment to their communities and encourage them to be proud of their culture.

“Wherever they choose to go, this program helps students never lose sight that they come from incredibly blessed places with deep connection and beautiful, vibrant cultures,” Pecos said.

To participate in the SPA program, students must be nominated by teachers, community leaders, professionals and tribal leaders. Through roundtable discussions, case studies and presentations by Native American leaders and noted scholars, students spend the week examining policymaking on the state and federal levels given the current political climate. They are encouraged to think critically about solutions to the challenges facing their communities.

One of the presentations, “Restoring Balance: Indigenizing Social Services on Pueblo Nations,” taught by Casey Douma, an attorney and member of the Laguna Pueblo, explored the Indian Child Welfare Act. This pivotal piece of legislation helps to keep indigenous children with their families by allowing tribes to intervene in a state court proceeding as well as transfer a case that originates in a state court to a tribal court. The act responded to the alarmingly high percent of native children being removed from their homes by public and private agencies and sent to live with families outside of the tribe. The presentation also addressed child neglect and abandonment, and challenged students to put themselves in the shoes of a hypothetical social worker to decide how to best deal with difficult family situations.

To translate what they hear in the classroom to the real world, students are divided into teams that research and present relevant policy topics. This year’s topics include educational inequalities through the Every Student Succeeds Act; assessing the impact of federal budget cuts to the Indian Healthcare Improvement Act and the need for a Center on Budget and Policy Analysis; analyzing the Safeguard Tribal Objects of Patrimony Act and establishing a Native American Social Workers Institute at New Mexico Highlands University. 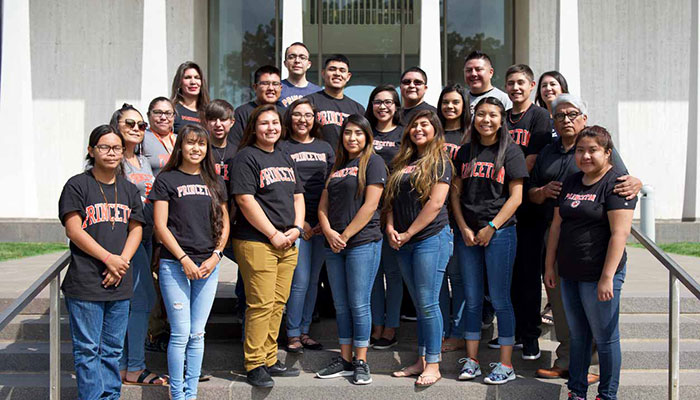 The week will culminate in a trip to Washington, D. C., on June 18 in which students will present their findings and policy recommendations to United States congressmen and senators representing New Mexico, as well as officials from the National Congress of American Indians (NCAI) and the National Museum of the American Indian.

“It is very exciting for me is to see the growth of the students from day one. These students come so far; they are so articulate and confident during the presentations,” said Christie Abeyta, a faculty member at Santa Fe Indian School and member of Santa Clara and Santo Domingo Pueblos.

The skillset developed at SPA was incredibly useful for Michael Bancroft, a sophomore college student in his second summer of the program.

“I was able to harness my confidence and leadership skills at my summer internship as a math teacher at the Santa Fe Indian School, where I reached the point where I would teach lessons by myself,” said Bancroft, who hopes to eventually design a new math curriculum that is culturally relevant to indigenous students to make math more engaging.

Bancroft is a member of the student team studying “Amendment to ESSA - Compressive Education Plans for Tribal Communities,” which analyzes the transformation of Indian education and challenges students to design the ideal educational experience.

Aside from helping students develop critical thinking and leadership skills, the SPA faculty serve as mentors, inspiring the students to embrace their culture while moving on to higher education or careers.

“For a long time, our people have been told to leave our values and culture at the door when pursuing education and careers. You submerge yourself into the new environment,” said Douma. “Seeing someone from your community who grew up in similar circumstances reach a leadership position shows our students that there are people who can strike a balance between obtaining an education and preserving their identity as an indigenous person. By bringing forth their own gifts and acknowledging they have value by way of their culture and community, they are enhancing the jobs they go into; they bring a unique perspective that is framed by core values.”