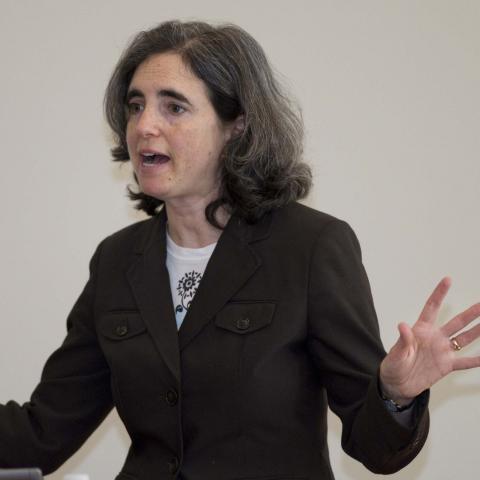 Alison Isenberg writes and teaches about nineteenth and twentieth century American society. She is currently completing a book about the aftermath of Dr. Martin Luther King Jr.'s assassination.

Isenberg's first book Downtown America: A History of the Place and the People Who Made It (link is external)(University of Chicago Press, 2004) received several awards: the Ellis Hawley prize from the Organization of American Historians; Historic Preservation Book Prize from Mary Washington University; Lewis Mumford Prize from the Society for American City and Regional Planning History; and an Honor Book award from the New Jersey Council for the Humanities. Her second book, Designing San Francisco: Art, Land and Urban Renewal in the City by the Bay (link is external) (Princeton University Press, 2017), received the 2018 PROSE Award for Architecture & Urban Planning from the Association of American Publishers, and a John Brinckerhoff Jackson Book Prize from the Foundation for Landscape Studies.

At Princeton, Isenberg is the founding co-director of the Princeton-Mellon Initiative in Architecture, Urbanism, and the Humanities (link is external) and Faculty Associate at the Princeton School of Public and International Affairs (link is external). She directed the Urban Studies Program (link is external) 2012-2014 and serves on its Executive Committee. She is Affiliated Faculty in the Program in Gender and Sexuality Studies, and on the American Studies (link is external) Executive Committee. 2015-2016 Isenberg held an Old Dominion Fellowship awarded by Princeton's Humanities Council (link is external). She has organized numerous public humanities workshops and events relating to her research into Trenton, New Jersey, in collaboration with filmmaker (and co-professor) Purcell Carson (link is external), playwright (and co-professor) Aaron Landsman (link is external), students and staff, and many community partners. This work has been supported by the 250th Anniversary Fund for Innovation in Undergraduate Education; the Program for Community-Engaged Scholarship, the Princeton-Mellon Initiative in Architecture, Urbanism and the Humanities; the McGraw Center for Teaching and Learning, and the Princeton Histories Fund. Isenberg and Carson's collaborative teaching and research received the 2019 Award of Recognition from the New Jersey Historical Commission.

Before moving to Princeton in 2010, Isenberg taught at Rutgers, The State University of New Jersey (2001-2010), University of North Carolina at Chapel Hill (1997-2001) and Florida International University (1994-1997). Her scholarship has been supported by visiting fellowships at the Bard Graduate Center for Studies in the Decorative Arts, Design History, and Material Culture (Spring 2010), the Center for Comparative Studies in Race and Ethnicity at Stanford University (2006-7), the Institute for the Arts & Humanities at the University of North Carolina (Fall 2000), and the Schlesinger Library at Radcliffe (1998-9). Shorter-term fellowships from the Graham Foundation, James Marston Fitch Foundation, Hagley Museum and Library, Rockefeller Archive Center, Winterthur Library, and the Beverly Willis Architecture Foundation have provided generous research resources. Before pursuing a Ph.D., Isenberg worked in affordable housing, parks planning, and historic preservation in New York City.

In winter 2020-21 Professor Isenberg will complete Uprisings, which she began researching in 2014. Uprisings takes the April 1968 unrest in Trenton, New Jersey as its starting point, offering a window into the volatile weeks after Rev. King’s assassination. Around the nation more than 40 people died in what was called the Holy Week uprisings, or King riots. Police said many victims were looters or arsonists. Trenton’s “riots” became a simplified explanation for the city’s woes. Yet there has been little research into the nation’s “scenes of racial violence,” as named by the Philadelphia Inquirer. Uprisings centers Harlan “Bruce” Joseph, a black college sophomore at Lincoln University who was fatally shot by a white officer during minor unrest in Trenton. Joseph’s life reveals a committed young man interested in the ministry who worked to make a better Trenton. The circumstances of his death correct longstanding misperceptions of the “riots” and their meaning. The shooting entwined a young man and his city in tragedy. This book disentangles the two, to tell a story of life and hope.

Isenberg is co-producer of Harlan B. Joseph Was Here, a 30 minute documentary film about the Trenton Uprisings story, directed by Purcell Carson (link is external). Anticipated 2020 release.

In 2021 Isenberg will wrap up the final chapters of a longstanding book project, Second-Hand Cities: Race and Region in the Antique Americana Trade, from the Civil War to Urban Renewal.