“The Cuban Revolution” – an exhibit currently on display at the Woodrow Wilson School’s Bernstein Gallery – features 80 rare, black and white photographs documenting a critical period in Cuba’s cultural and political history. Taken between 1947 and the late 1960s, the photos are part of a private collection that belong to David Sellers, a resident of Hopewell, New Jersey.

This is the first time the photographs have been publicly exhibited. Each photo was personally selected, matted and framed by Sellers, who also researched and wrote all the captions.

On Dec. 16, Sellers welcomed nearly 30 Princeton High School (PHS) Spanish students to the exhibit, offering them a unique look at the history represented by the display.

The students, who have been studying the Cuban Revolution in a class that uses visual arts as a tool for learning about Latin American history and culture, were encouraged by Sellers to look for clues to the story within each photo. Sellers composed each photo’s caption with this thought in mind, telling the students that “the collection creates a narrative, but it is an incomplete story.” He encouraged the class to study the faces in the photographs and imagine what the people were feeling. 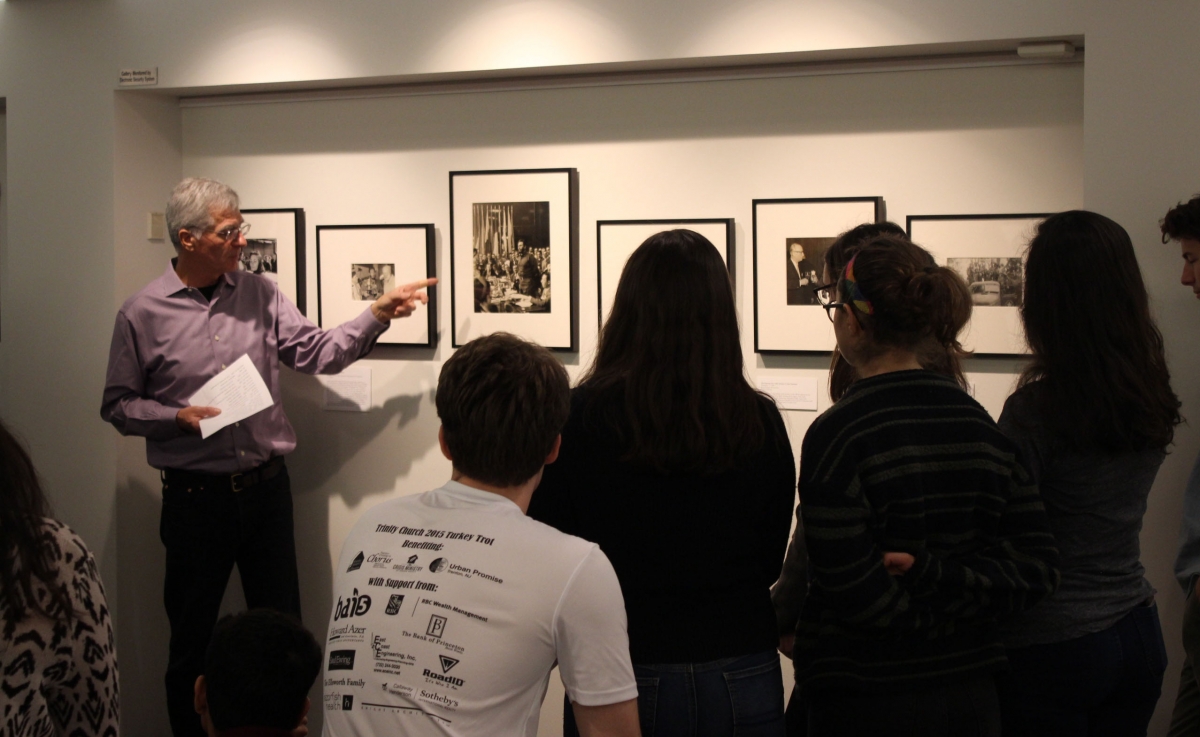 After Sellers’ opening remarks, students were given time to explore the exhibit at their own pace. Throughout the visit, Sellers welcomed questions and eagerly responded to students’ interest in the collection. Several students wanted to know how long it took to collect the photos and whether any of the photos were copies. Sellers confirmed they are all printed from the original negatives and that he spent nearly ten years collecting them.

When asked by PHS senior David Cohen about what prompted his interest in collecting the photos, Sellers told the class there were three factors: a personal penchant for taking black and white photos, an interest in the iconography of revolution and the complexity and contradiction of this specific period in Cuba’s history.

“When we were studying the revolution,” one student said after the morning concluded, “it was hard to imagine that the numbers and events we read about actually happened. The photos allowed us to connect with the material.”

“We feel very privileged to have been able to partake in this wonderful and important exhibit at Princeton University,” PHS teacher Martha Hayden said.

Exhibits in the Bernstein Gallery are open to the general public, offering a cultural contribution to both the Princeton community as well as the general public. Entrance to “The Cuban Revolution” is free, and the exhibit will be on display through January 28.

The gallery is located on the lower level of Robertson Hall on the Princeton University Campus, at the corner of Washington Road and Prospect Avenue. It is open Monday through Friday, 9 a.m. to 5 p.m. (Note: the Gallery will close at noon on Dec. 23 and 30, and it will be closed all day on Dec. 24, 25, 31 and Jan. 1). Groups of 10 or more are asked to schedule a tour by contacting Kate Somers (609-497-2441,ksomers@princeton.edu).