More Aggressive Climate Policies Are Needed to Save the Future Poor

People often believe that future generations will be better off than their predecessors, but that may be a dangerous assumption when it comes to climate change, according to new Princeton research in the Proceedings of the National Academy of Sciences.

Past research shows the poor bear the brunt of climate change impacts, especially in terms of long-term income growth. A new model developed at Princeton University predicts that, if the poor continue to be affected in this way — and current climate policies remain the same — the world’s future poor will be even worse off than impoverished people today.

The model is the first to consider how the effects of climate change impacts, and the policies designed to address them, will produce very unequal outcomes between the rich and poor in the same country. Given the model's dire predictions, aggressive climate policies may be needed to protect the world's most vulnerable populations, the researchers said.

"It is very likely that what we do now will impact the poor more going forward, so we need models like this one that can properly assess this so we can enact the right policy strategy," said Marc Fleurbaey, a co-lead author of the paper and the Robert E. Kuenne Professor in Economics and Humanistic Studies at the Woodrow Wilson School of Public and International Affairs and University Center for Human Values at Princeton. 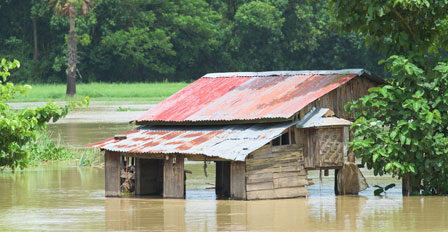 The new model, the Nested Inequalities Climate-Economy model or NICE, builds off the Regional Integrated Model of Climate and the Economy (RICE), which was developed by William Nordhaus of Yale University. RICE, alongside other models, is used by the U.S. Environmental Protection Agency to determine the potential effects of different climate policies.

One factor these current models ignore, however, are the inequalities within regions and countries. This is equivalent to assuming that the damage caused by climate change — such as lower crop yields or coastal flooding caused by sea-level rise — will be proportional to households' incomes among a region's population. Structuring policies around such assumptions can be very misleading, the researchers said.

Given the vast differences in income levels and vulnerabilities within a particular country, the probability of climate change impacts being proportional to income across populations is unlikely. For example, it is likely that poorer farmers would get hit much harder by a climate change catastrophe — such as a drought or flooding — thereby significantly reducing their income. This would have significant long-term effects.

The new model developed at Princeton through support of the Climate Futures Initiative (CFI) has the power to examine a number of climate-related scenarios, and their impacts on varying populations, on a finer-tuned scale. CFI is an interdisciplinary research program at Princeton administered and sponsored by the Princeton Environmental Institute and also sponsored by the Princeton Institute for International Regional Studies and the Andlinger Center for Energy and the Environment.

Using their new framework, the researchers examined what might happen to certain populations if there were increases in annual emissions and temperature rise. They also charted the implications for climate policies that best balance the costs of mitigation and the benefits of avoided climate impacts.

The results revealed significant policy implications. Depending on how climate impacts unequally affect the rich or poor within every region, the optimal policy may involve a lenient or sharp increase in the price of carbon over the next decades (lenient when impacts are proportional to income, sharp when impacts are concentrated on the poor). The rather lenient policies recommended by classical models that ignore such inequalities appear insufficient to protect the future poor of Africa in particular.

"When you change the assumption of who is hit hardest by climate impacts, very different results emerge," Fleurbaey said. "This is why it's urgent that we substantiate our assumptions going forward. We need more empirical studies to truly understand who will be most affected by climate change in the future."

The link between poverty and climate is of interest to the research community, especially the World Bank, which recently released a report titled, "Shock Waves: Managing the Impacts of Climate Change on Poverty." Their analysis emphasizes the greater vulnerability of poor populations to climate impacts and highlights the need for better modeling, like that proposed by the Princeton team, to reduce poverty and climate change.

The paper, "Inequality, climate impacts on the future poor, and carbon prices," was published in PNAS on Dec. 7.