Playing Dumb and Giving the Cold Shoulder: How Stereotypes Pervade the Workplace

People in the workplace may adjust their behavior to break stereotypes about themselves or match the stereotypes of others — even if it means playing dumb or giving the cold shoulder, a Princeton University study finds.

The study, published in the Journal of Experimental Social Psychology, shows that managers play down their competence to appear warmer to their subordinates while the subordinates hide their own warmth in an effort to appear more competent.

The study included four experiments with approximately 150 to 200 participants in each. The researchers chose to focus on workplace encounters because they provide the most common experience Americans have with social hierarchies.

In each experiment, the reasoning for the participants' behavioral changes kept coming back to stereotypes: Past studies have shown that managers are typically seen as competent and cold, while lower-status employees may be seen as warm, but not entirely competent. The researchers found that both supervisors and subordinates chose to present themselves in diverging ways either by trying to break down these stereotypes — what the researchers label as "stereotype-disconfirming" behavior techniques — or by mirroring or "matching" the expected behavior of the other person. 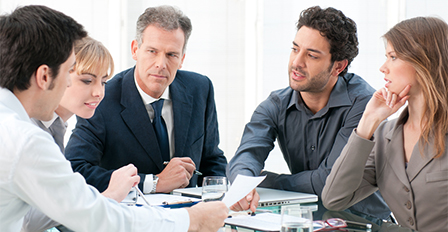 "In doing this, people might actually talk past each other, making people have more of an awkward misunderstanding," said Jillian Swencionis, lead author and doctoral candidate in psychology and social policy at Princeton's Woodrow Wilson School of Public and International Affairs. "Our findings illustrate just how invasive perceived inequality and social hierarchies really are, impacting both interpersonal relationships and workplace encounters.

"In terms of policy, organizations would do well to recognize these warmth-competence tradeoffs in interactions between employees of different rank, for example, in evaluations or interviews. The stereotypes people hold about others may not necessarily be true, so when they're trying to 'match' the other person, they're matching what they think the other person is like. These kinds of diverging impression management strategies may be one reason for misunderstandings or otherwise awkward situations people have in these interactions," Swencionis said.

Susan Fiske, co-author on this research and the Eugene Higgins Professor of Psychology and Public Affairs at Princeton's Woodrow Wilson School and Department of Psychology, has long studied stereotyping, social power and intergroup relations. Swencionis has focused her doctoral studies on the connection between inequality, social science and policy. For this particular study, they wanted to determine how people feel inequality within interpersonal interactions and how they cope with discomfort.

"People are uncomfortable talking about social class, but there are clear situations where higher and lower social classes interact," Swencionis said. "We wanted to find out what happens there. What are people's concerns, and what do they do about it?"

Do I Change My Behavior Because of Status?

In the first experiment, the researchers tested whether status hierarchies led people to present themselves differently to one another. Participants were recruited through Amazon's Mechanical Turk, a crowdsourcing Internet marketplace, and 151 were selected.

Participants were then asked to describe how they thought the interaction would go and rate the extent to which they wanted their partner to know certain traits about themselves. The researchers included 20 traits. Half conveyed competence — like "ambitious" or "capable" — while the other half conveyed warmth, such as "considerate" or "generous." Afterward, participants were asked how important it was to be liked versus respected.

Are We Going ‘Against the Grain’ or ‘With the Flow’?

In the second experiment, the researchers sought to determine why people present themselves differently in hierarchical situations. They again used Amazon's Mechanical Turk, recruiting 202 participants.

They were randomly assigned to imagine being paired with either a supervisor or a subordinate and were asked — using the same list of traits from the first experiment — to choose which traits about themselves they would share. Participants also were given details about their partner's level of friendliness in the workplace, information not provided in the first experiment.

"We wanted to see what participants would do with this additional information. When people are 'playing dumb' or pretending to be unfriendly, are they doing this to disconfirm stereotypes about themselves or are they simply trying to be like the other person?" Swencionis said.

The results showed a combination of factors. The participants were both disconfirming perceived stereotypes about themselves and trying to match the other person.

"They are trying to bridge this gap between what low-status and high-status people are stereotyped as being," Fiske said. "Part of bridging that gap is not being that way, and part is getting closer to what the other person is."

The third experiment was identical to the second, except the 200 participants recruited from Mechanical Turk learned about their partner's reputation with regard to competence.

The same pattern emerged: Participants sought to disconfirm stereotypes and wanted to be more like the person with whom they were interacting.

How Do You Perceive Me?

In the final experiment, the researchers wanted to determine whether a person's goals shaped the interaction. They recruited 152 participants. This time, they were asked to rate how they perceived their partner, and how they thought their partner perceived them.

"All of our studies show this clear pattern in which people are uncomfortable with status divides because of how they are stereotyped or perceived. As a result, they present themselves in diverging ways," Fiske said.

"The bigger picture is that supervisors trade off warmth and competence, and subordinates know this. Someone seen as highly competent will seem colder, and someone seen as really warm will seem dumber, regardless of the fact that these dimensions don't really operate in opposition," Fiske said. "Human resource managers, job applicants, reference letter writers, organizational managers and candidate-image handlers all need to know this."

The team is currently working on a similar study among college students in higher- and lower-ranked universities. They are also investigating how higher-status people interact with their subordinates in face-to-face encounters.

The paper, "Promote up, ingratiate down: Status comparisons drive warmth-competence tradeoffs in impression management," was published in the Journal of Experimental Social Psychology.

This research is part of Swencionis's doctoral dissertation. She is supported by the National Science Foundation Graduate Research Fellowship Program and the Woodrow Wilson School Joint Degree Program in Psychology and Social Policy. Portions of this research were presented at the Society for Personality and Social Psychology conferences in 2014, 2015 and 2016 and at the European Association of Social Psychology conference in 2014.