Who's Who at the Woo: Graduate Admissions Office 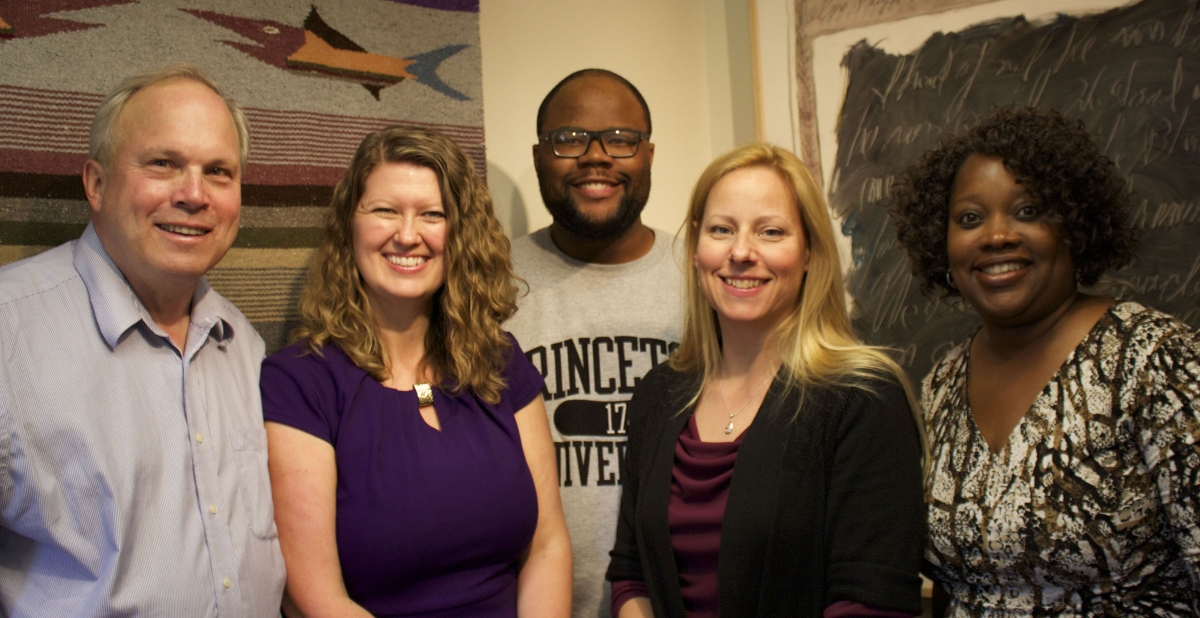 While these applications could be reduced to numbers and metrics, the Wilson School graduate admissions team of five doesn’t lose sight of the people who are attached to them.

In building each class of master’s students, Templeton and Melissa Lyles, assistant director of graduate admissions and social media strategist, strive to create a community of highly capable public service devotees in which students thrive off of each other’s wisdom. With the additional goal of recruiting students with an array of backgrounds and interests, they spend each fall traveling to regions where the School has not historically drawn applicants, often because students are unaware that the path to a master of public affairs or public policy degree could be a match for their aspirations.

An essential ingredient of a successful class, said Templeton, is learning from the experiences of their colleagues.

“If someone grew up in a single-parent home in which the parent never went to college, worked their way through community college and a four-year school and then worked in the trenches with the homeless and the mentally ill, his or her experience is fundamentally different from someone who has a strong interest in mental illness or homelessness but has never really been on the street or in shelters,” Templeton said. “The person who doesn’t know it first-hand may understand it from the policy perspective. You want to bring those two perspectives into the same program.”

Before coming to Princeton’s Undergraduate Admissions Office in 1987, Templeton knew he wanted to make a difference in access to education for underrepresented groups. In 1990, he began directing the University’s minority recruitment program until 1994, when he moved to the Wilson School’s graduate admission program. 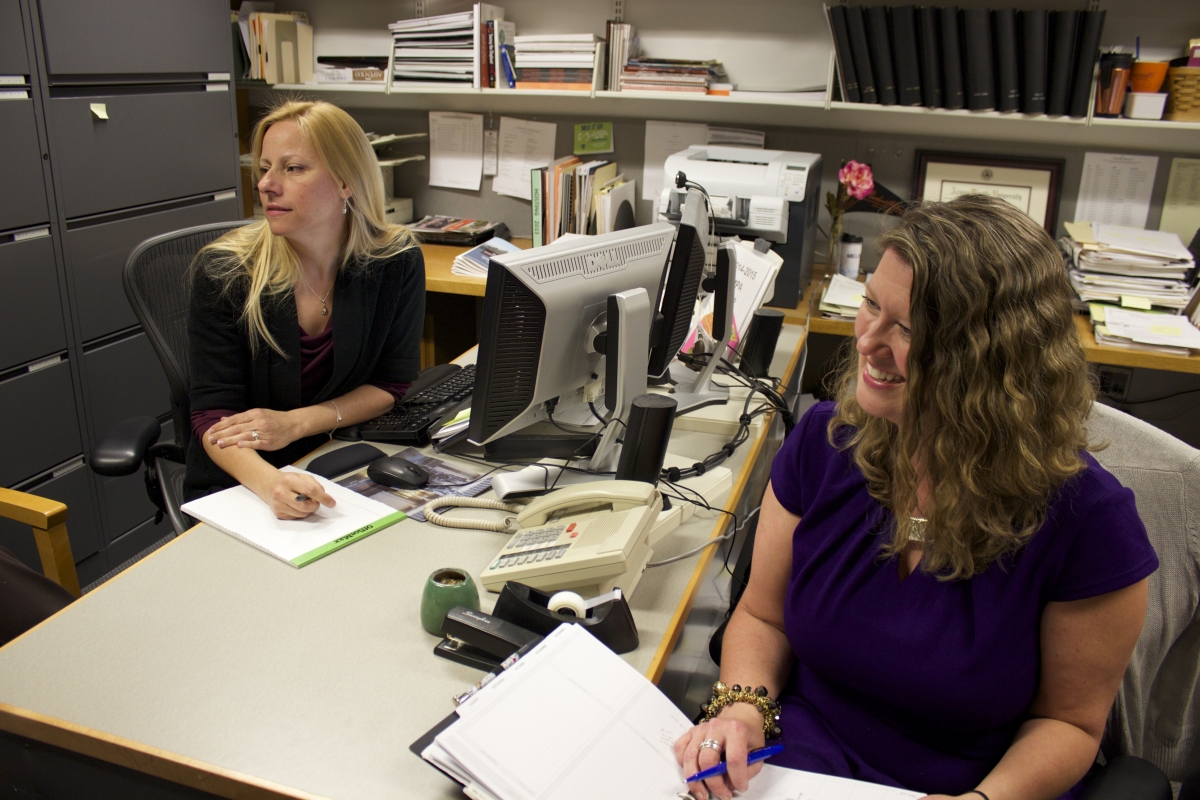 Lyles’s insight comes from her previous role as director in the Wilson School’s Graduate Program Office. She considers it a natural transition – the mission of the two departments has historically been so interconnected that admissions was already an unofficial part of her work.

But now as an official member of the admissions team, she is able to actively recruit students, including those who don’t have the Wilson School on their radar.

“That’s the greatest part of what I do – talking with those students and letting them know this is a possibility for them,” Lyles said.

While working for the Graduate Program Office, Lyles led the Junior Summer Institute (JSI), which is part of the Public Policy and International Affairs Fellowship Program. This seven-week session helps prepare non-Princeton undergraduates for careers in public service. Lyles now has the opportunity to see some of the JSI graduates return as applicants to the MPA program.

McGinnis, who guides applicants and the admissions team through each admissions cycle, achieved a new level of empathy for students while completing her own master’s in education in college student affairs in 2010. Facing an online course in statistics, she was grateful for the support of the Wilson School graduate students who cheered her on as she battled through the class. 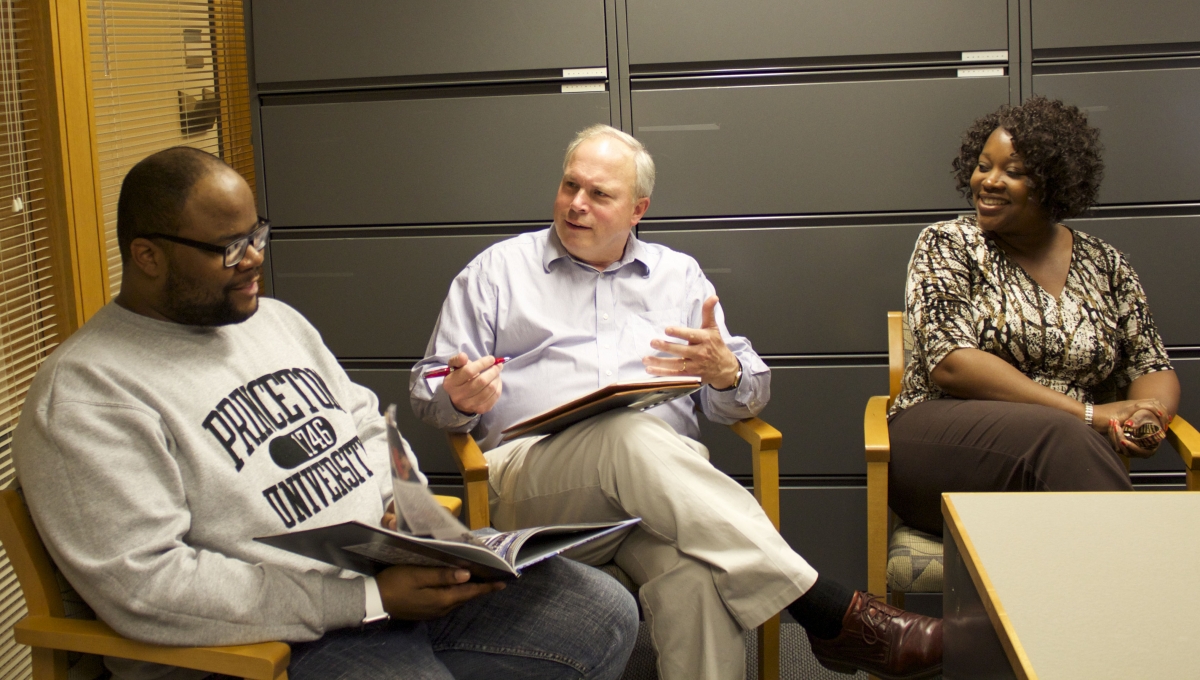 Lisa Duffy, a graduate admissions assistant, manages the JSI applications in addition to marketing and advertising. Like her cohorts, her career in admissions transpired from her dedication to education and a stroke of luck. After earning her bachelor’s in music education, a month of temporary work at Princeton’s Undergraduate Admissions Office led to a full-time position of almost 11 years. She joined the Wilson School in 2013.

“It was very unexpected, but I really enjoy admissions,” Duffy said, noting different students and visitors she has met over the years.

Vance Stephens ’11, who graduated from Princeton with a bachelor’s degree in sociology, is the office traffic controller, fielding e-mails and phone calls from candidates, welcoming visitors and strengthening the student-staff bridge. He sees his role as a graduate admissions assistant as an extension of his experience as a student, and as the catalyst to his enrollment in a business administration master’s program at Rutgers University.

“As a university, the primary mission is to foster education, research and opportunity, but it still has to run in an efficient and effective way,” Stephens said.

By continuing his education, Stephens hopes to enhance the resources available to students and reinforce the relationship with administration.

Now, as summer unfolds, the team can reflect on the end of one admissions cycle, and begin to plan for the next. But there is one takeaway that doesn’t change from year to year: the value of finding a path to education.

“Students go from questioning how they got into this program, to becoming leaders in the policy arena. They come back and say, ‘You changed my life,’” Lyles said. “Knowing that you were a part of that is just incredible.”

Who's Who at the Woo is a series featuring members of the Woodrow Wilson School community.